What Is a Banknote?

The term "banknote" generally refers to paper money, bills, or currency. They are often issued by banks, although not always. In the U.S., the Federal Reserve is currently the only body that can legally issue banknotes, but in the past, private banks could issue them as well. The original definition of banknotes meant they were "promissory notes." Banknotes were issued by a banker and were payable on demand or at a fixed date decided by the recipient. They were often handwritten and served as a kind of form. Some countries still issue banknotes via private banks.

Before the U.S. began to transition away from the Gold Standard, a U.S. citizen could exchange banknotes for gold or silver. Today, we define banknotes as a "fiat currency," meaning they are valued by supply and demand rather than a physical reserve of precious metal. Today, banknotes are simply paper bills of fixed denominations that circulate as regular currency — their value changes with inflation.

Features of a Banknote

You may notice a variety of numbers, notes, symbols, and illustrations on your bills as a banknote collector or notaphilist. Banknotes have both a front and a back, called the obverse and the reverse. Both sides contain valuable information for issuers and payees. Some older notes were printed on only one side, meaning the back of the banknote was left blank.

Understanding what all the details on your banknotes mean can enhance your enjoyment of and interest in your bills:

Printed money was first introduced in China, during Emperor Chen Tsung's reign. From 998 to 1022 A.D., the Emperor awarded 16 merchants the right to issue universal bills of exchange. However, since many merchants failed to redeem them, the public lost faith in the notes. The Chinese government began issuing banknotes in 1023 and created a Bureau of Exchange to issue paper money. While none of the original bills have survived, archaeologists have recreated them using brass printing plates discovered from this period.
The first European country to adopt banknotes was Sweden. The Swedish government began issuing notes in 1661, backing them with a guarantee of redemption. To instill trust in the new paper currency, the government made sure each banknote had 16 hand-signed endorsements. Paper bills soon became prevalent throughout Europe since they were easy to carry around and could be used to purchase anything. As popularity grew, some governments began overprinting money to the point where bills became worthless. Devalued or hyper-inflated historical currency is valuable today among collectors.
The first piece of printed money in America was the $2 bill, which the Continental Congress issued on June 25, 1776. In 1861, during the Civil War, the U.S. Department of the Treasury began issuing non-interest bearing Demand Notes. The following year, Congress issued a new class of currency called "United States Notes." These notes stayed in circulation until 1971, and they are recognized by collectors for their red seals and serial numbers.
The U.S. established a national banking system in 1863, and the U.S. began issuing National Banknotes, secured by bonds. Since 1913, The Federal Reserve has been the central bank of the United States and is still in charge of issuing today's banknotes.

How Are Banknotes Made?

While we often refer to banknotes as "paper money," they are not always paper. A more accurate banknote definition would describe them as "printed money." Some are made from cotton or linen. In the U.S., bills are a blend of 75% cotton and 25% linen. The material is more durable than regular paper. The Bank of England is famous for replacing their paper currency with polymer notes. According to the Bank of England, these polymer notes last two-and-a-half times longer and have a 16% lower carbon footprint than paper money.

Understanding the materials your bills are made of can help you determine how to care for and preserve them. Learning more about the intricate printing process can deepen your fascination with your collection.

The steps to design, print, and protect currency can vary slightly from country to country. The process falls into four phases:

What Is a Banknote Coin?

A banknote coin is a commemorative coin that is popular among both banknote and coin collectors. They are often minted in honor of a specific banknote. You can find banknote coins commemorating the issuance of now-rare gold banknote certificates, and others depicting the Declaration of Independence. You can even own a piece of modern history when you buy a banknote coin featuring today's currency, such as the 2013-redesigned $100 bill.

Banknote coins are usually either silver-plated or gold-layered with a color tableau of the banknote. The engraving features portraits of U.S. presidents or historic events, symbols, or monuments. 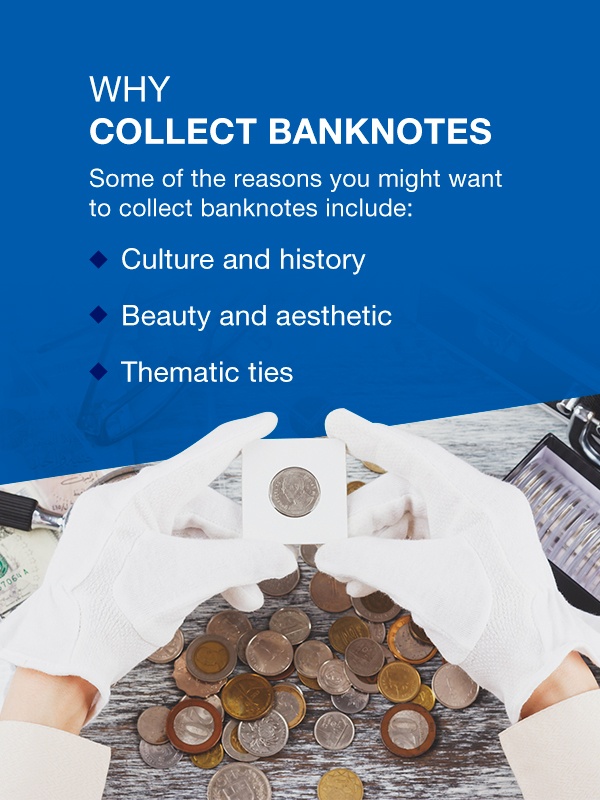 Anyone from history buffs and art enthusiasts to world travelers can find intrigue and joy in collecting banknotes. You can focus on modern international currency or notes from throughout history. Many collectors enjoy collecting printed bills because they hold personal and historical significance and take up little space. Thanks to each bill's unique serial number, every item in a banknote collection is one-of-a-kind.

Some of the other reasons you might want to collect banknotes include:

How to Collect Banknotes and Currency Notes

Many notaphilists begin their collections with a particular goal in mind. Others pick up a few banknotes first and eventually decide on a theme to guide future collecting.

There are many types of banknote collections you can choose from, such as:

The simplest way to begin collecting banknotes is to save the ones you find in circulation. If you are a beginner, you might attempt to find a complete set of $1 bills from every combination of Federal Reserve District and Bureau of Engraving and Printing (BEP) locations. There are 12 Federal Reserve Districts that issue U.S. bills and two BEP printing facilities — one in Washington, D.C. and one in Fort Worth, Texas. That means a complete collection would include 24 $1 bills.

Another way to collect is to keep notes as souvenirs from countries you've visited. Or, maybe your goal is to obtain one bill from every country in the world. Since visiting every country yourself is not always possible, you might instead rely on banknote dealers, auctions, or collector fairs to complete your set.

At American Mint, we're you're reliable partner for all kinds of collecting. We specialize in high quality and privately-minted coins and offer a brilliant selection of banknote coins. Among our collection, you'll find an array of gold-layered and silver-plated commemorative banknote coins. We also offer both gold and silver banknote certificate ingots, reproduced from the rare and valuable original certificates. These fascinating pieces of monetary art are perfect for rounding out any coin or banknote collection.

Own your very own piece of U.S. Treasury and Federal Reserve History with American Mint's banknote coins and replica banknote certificates. Call us toll-free at 1-877-807-MINT to learn more about the items in our banknote collection.