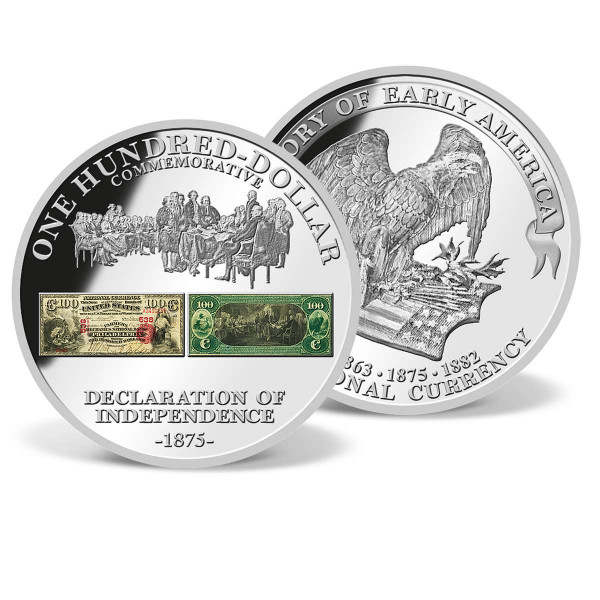 Includes a free preview of future issues in the collection History of Early US Currency. For more information, please refer to the Satisfaction Guarantee tab below. If you do not wish to preview future issues in the collection, you may purchase the single item using the 'Individual Item Only' tab at right.
Price $79.95 * $9.95
Total: $9.95
You save $70.00
Total: $79.95
Tweet
Share
Description Satisfaction Guarantee
Description
From 1863 to 1935, the federal government issued National Currency banknotes. Chartered local... more
Close menu
1875 $100 Declaration of Independence Commemorative Color Coin

From 1863 to 1935, the federal government issued National Currency banknotes. Chartered local banks received these notes with their names prominently featured on them, which created a variety of notes with unique details.

In addition to the names of the chartered banks, the first series of these banknotes depicted artwork of famous events throughout American history. The highest denomination of these National Currency banknotes, the $100 note, featured John Trumbull's famous "The Declaration of Independence," which represents the presentation of the Declaration of Independence'sdraft to congress.

Over time, few of the banknotes survived. These pieces of delicate, historical artwork are incredibly challenging to find, often selling for over $100,000, depending on the condition and the chartered bank. With an 1875 $100 Declaration of Independence Commemorative Color Coin, you can add a sturdy replica of this note to your collection.

Introducing the $100 Commemorative Declaration of Independence Coin This 1875 one hundred dollar Declaration of Independence coin depicts both sides of the banknote in full color. On the left is a tableau ofthe note with the chartered bank's name. The right features the other side of the note with Trumbull's painting. With this coin in your hand, you can see the great amount of detail that the federal government put into these National Currency banknotes over a century ago.

The details of this stunning one hundred dollar commemorative Declaration of Independence coin extend past the banknotes as well. Embossed above the banknotes is a rendition of Trumbull's "The Declaration of Independence" painting. The bottom of the coin includes the year 1875, when the banknote was issued. On the reverse of this historical representation is the nation's greatest symbol, the American bald eagle. It stands with an American shield, and above its head is a ribbon detail with the words "History of Early America."

Order your $100 commemorative Declaration of Independence coin today, and take a look at our other American history coins to fill your collection.