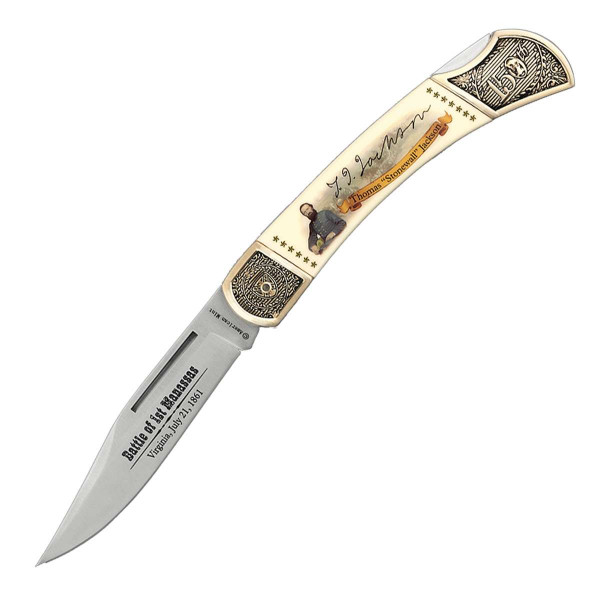 Includes a free preview of future issues in the collection Civil War Knives. For more information, please refer to the Satisfaction Guarantee tab below. If you do not wish to preview future issues in the collection, you may purchase the single item using the 'Individual Item Only' tab at right.
Price $59.95 * $19.95
Total: $19.95
You save $40.00
Total: $59.95
Tweet
Share
Description Satisfaction Guarantee
Description
Born in 1824, Thomas Jackson graduated from the United States Military Academy at West Point in... more
Close menu
Stonewall Jackson - Battle of 1st Manassas Pocket Knife

Born in 1824, Thomas Jackson graduated from the United States Military Academy at West Point in 1846, and then taught at the Virginia Military Institute. When the Civil War began in 1861, Jacksonreturned to the military, fighting for the Confederacy. Jackson became one of the Confederacy's greatest fighters and General Lee's right-handman. Jackson earned the nickname "Stonewall at the Battleof First Manassas on July 21, 1861, when a Confederate general took notice of his defiant stand against a Union advance and exclaimed "There is Jackson standing like a stone wall. A string of rousing victories and a proven ability to move his men quickly made Jackson a champion in the Confederacy.

At the Battle of Chancellorsville in May of 1863, Thomas "Stonewall Jackson was mistakenly shot by Confederate soldiers and later died of complications. His death marked a turning point in the war. Without his most trusted commander, General Lee's forces were overwhelmed at Gettysburg and the South eventually surrendered at Appomattox in 1865.

Meticulously designed by American Mint - in conjunction with The National Civil War Museum - for the Sesquicentennial of the CivilWar, this museum-quality pocket knife features the famous Confederate commander illustrated in early American woodcut style and tinted to create a beautiful scrimshaw effect on the simulated bone handle. The 420 stainless steel blade is expertly etched with the place and date of the Battle of 1st Manassas where he received his nickname "Stonewall. The handle is framed by an intricately engraved,gold tone bolster. This 8 5/8" collector knife comes in a custom collector's box and includes a Certificate of Authenticity, assuring quality and value for generations to come.