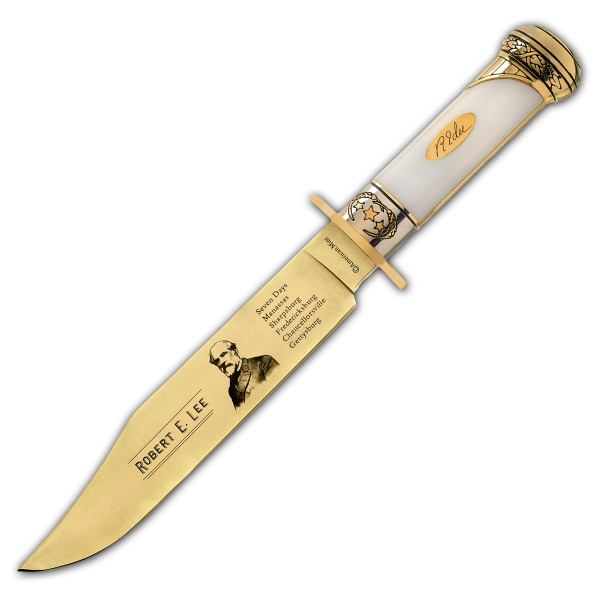 Includes a free preview of future issues in the collection Generals of Confed. Civil War. For more information, please refer to the Satisfaction Guarantee tab below. If you do not wish to preview future issues in the collection, you may purchase the single item using the 'Individual Item Only' tab at right.
Price $99.95 * $29.95
Total: $29.95
You save $70.00
Total: $99.95
Tweet
Share
Description Satisfaction Guarantee
Description
Over 150 years ago - with our nation divided over issues of slavery, states' rights, and... more
Close menu
Robert E. Lee Prestige Edition Bowie Knife

Over 150 years ago - with our nation divided over issues of slavery, states' rights, and economic survival - the southern states seceded from the Union to form the Confederate States of America. Like so many Americans caught in the middle, Robert E. Lee, a respected Colonel in the Union Army, was forced to choose between his nation and his state. Driven by duty and guided by honor, Lee declinedcommand of the Union Army and sided with his home state of Virginia. He soon rose to the rank of General and was given command over the Army and Navy of Virginia. His dazzling military maneuvers brought about many victories for the outmanned Confederate Army before succumbing to Union forces at Appomattox in 1865.

Robert E. Lee was a man of great personal character and he devoted the rest of his life to setting an example of conduct for thousands of ex-Confederates. He urged Southerners to hold no animosity toward the North and raise their children as Americans. His efforts, both during and after the war, earned him the respect and admiration of the entire nation.

Meticulously designed by American Mint - in conjunction with The National Civil War Museum - for the Sesquicentennial of the Civil War, this magnificent bowie knife was created from a single piece of tempered 420 stainless steel. The hand-polished blade is luxuriously layered in 24k gold and features a laser etched portrait of Robert E. Lee with the names of the battles he fought. The cold-cast handle is inlaid with a solid brass nameplate laser-etched with Lee's signature and features a 24k gold-plated guard and pommel with designs from an original American Civil War officer's sword. This 12.5" collector knife comes in a custom collector's box and includes a Certificate of Authenticity, assuringquality and value for generations to come.

You'll Love Our Affordable Online Pricing If you're tired of paying high prices for your collectible knives, you'll appreciate partnering with American Mint. Our mission is to deliver high-quality coins and collectibles at a budget-friendly cost. We're offering the Robert E. Lee Bowie Knife for sale at a surprisingly low price. Theopportunity for free shipping and interest-free monthly installments (if meeting eligibility requirements) can make purchasing collectibles easier and more convenient.

Order Your Robert E. Lee Bowie Knife Today Our streamlined ordering simplifies the process of purchasing our products online. If you need help, you can reach us by phone on weekdays at 1-877-807-MINT.