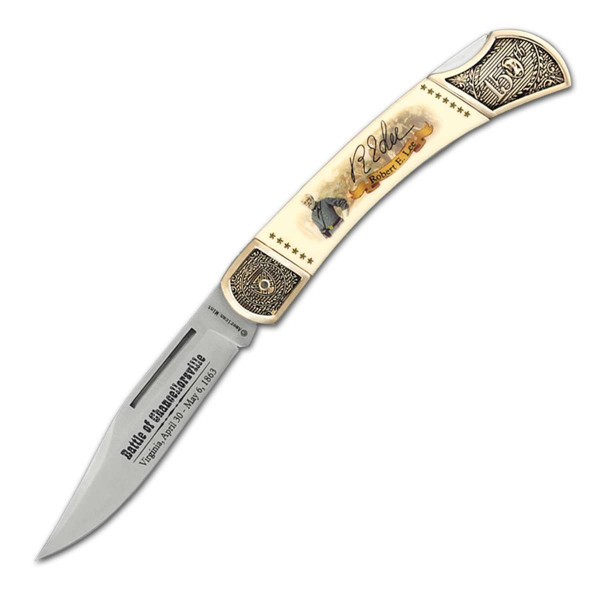 Driven by duty and guided by honor, Robert E. Lee achieved legendary status as a true hero of the Confederate South during the Civil War. His greatest victory was at the Battle of Chancellorsvillein May of 1863, where he defeated the vastly superior number of Union forces. His dazzling military maneuvers brought many more victories for the outmanned Confederate Army before succumbing to Unionforces at Appomattox in 1865. Even in defeat, Lee served as a symbol of courage and dignity, embodying the finest elements of a true Southern gentleman. After the war, Lee set aside all animosity andurged the people of the South to work for the restoration of peace and harmony in a united country.

Meticulously designed by American Mint - in conjunction with The National Civil War Museum- for the Sesquicentennial of the Civil War, this museum quality pocket knife features the famous Confederate general illustrated in early American woodcut style and tinted to create a beautiful scrimshaw effect on the simulated bone handle. The 420 stainless steel blade is expertly etched with the place and date of his greatest victory at the Battle of Chancellorsville. The handle is framed by an intricately engraved, gold-tone bolster. This 8 5/8" collector knife comes in a custom collector's box and includes a Certificate of Authenticity, assuring quality and value for generations to come.