15/07/2011 00:00 0 Comments
Mechanicsburg, PA – American Mint, LLC President Kevin Sacher is proud to announce that the company hosted its one millionth customer at its headquarters last week. John Sauvageot, of Rayland, Ohio, was the lucky one millionth nationwide customer. Founded in 1998, the company experienced a 40% increase in sales over the past year alone, which allowed it to hit the one millionth customer milestone earlier than expected.

To celebrate, American Mint sent Sauvageot, his wife, and their 5-year-old daughter to an all-expense paid 4-night, 5-day package tour to one of our nation’s most historic places; Philadelphia, Pennsylvania. The family enjoyed tours through the city, through its historic district, and a foods of Philadelphia tasting event. The Sauvageots also visited American Mint’s headquarters in Mechanicsburg, Pennsylvania, toured the facility, met the management team, and participated in an award presentation from Sacher. “I would like to thank everyone for this opportunity because this is going to be something our daughter will remember for quite a while,” Sauvageot stated, who is an avid collector of Civil War, Statue of Liberty, and presidential-themed coin sets. 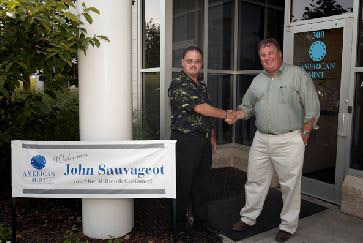