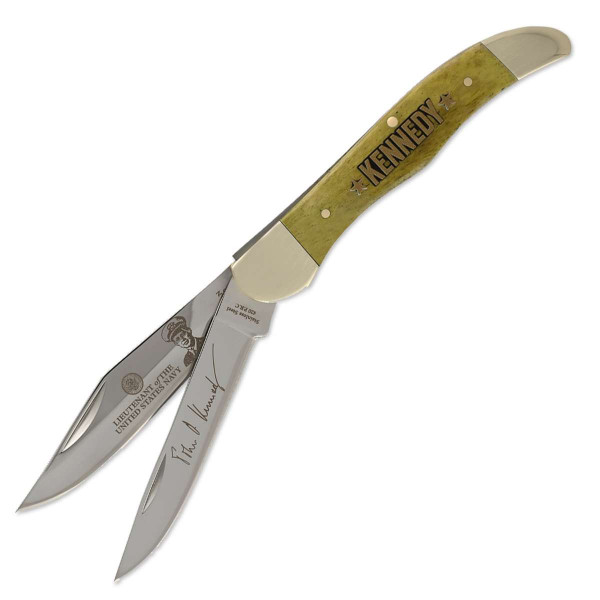 Includes a free preview of future issues in the collection Military Presidents Knives. For more information, please refer to the Satisfaction Guarantee tab below. If you do not wish to preview future issues in the collection, you may purchase the single item using the 'Individual Item Only' tab at right.
Price $69.95 * $19.95
Total: $19.95
You save $50.00
Total: $69.95
Tweet
Share
Description Satisfaction Guarantee
Description
In 1961, John F. Kennedy was sworn in as America's 35th President. But before that, he was a... more
Close menu
John F. Kennedy Trapper Knife

In 1961, John F. Kennedy was sworn in as America's 35th President. But before that, he was a decorated war hero who served in the U.S. Navy during World War II. Kennedy was sent to the South Pacific where he was injured when the patrol torpedo boat he commanded was rammed by a Japanese destroyer. Despite his injuries, Kennedy guided the surviving crew members to safety. For his heroism, he wasawarded the Navy and Marine Corps Medal and a Purple Heart.

After the war, JFK entered politics, and America fell in love with his youthful charm, good looks, and quick wit. As President, Kennedy's strong will and political savvy led the nation through some very trying times. His brilliant political career was cut short by an assassin's bullet on Friday, November 22, 1963, in Dallas, Texas. Today, JFK is remembered as one of the most beloved and revered men ever to hold the office of President of the United States.

This American Mint Exclusive trapper knife is superbly crafted in 420 stainless steel. The classic 2-blade pocket knife is expertly etched on both of the razor-sharp blades with tributes to one of our nation's greatest Presidents. The distinctive handle features genuine bone grips that is etched with Kennedy's name offset by a pair of military stars. Your limited-edition trapper knife comes in a custom collector's box and includes a Certificate of Authenticity.