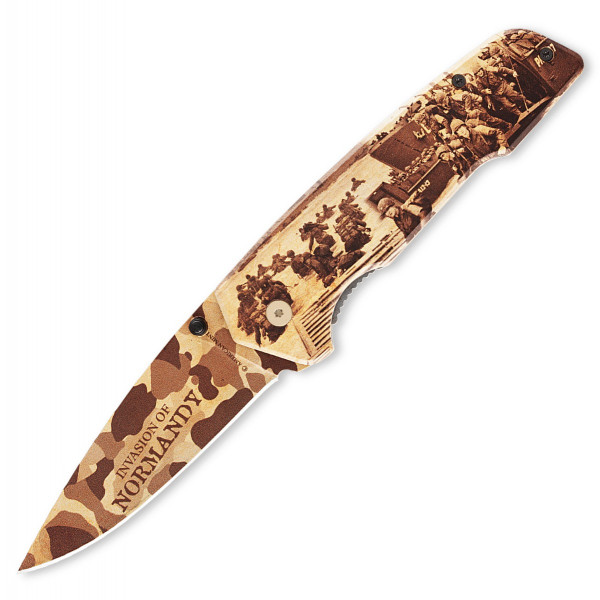 By 1944, German forces were stretched thin as they tried to defend the entire northern coast of Nazi-occupied Europe. Hitler knew that a coastal attack was imminent, but a complex campaign of misinformation from the Allies successfully kept the Nazis in the dark about the true details of the invasion.

On the morning of June 6, 1944, more than 156,000 troops from Britain, Canada, andthe United States crossed the English Channel and landed on the beaches of Normandy in the largest seaborne invasion in history. The Allied troops stormed the heavily fortified shores littered with mines, wooden stakes, barbed wire, and machine gun emplacements. Although the risky invasion claimed the lives of many brave soldiers, the operation took the Nazis by surprise and allowed Allied forcesto gain a foothold in Europe that choked Axis supply lines and led to German surrender in 1945.

Order Your Limited-Edition Invasion of Normandy Pocket Knife Today Available exclusively from American Mint, the limited edition Invasion of Normandy Pocket Knife is crafted in 420 stainless steel with 3D printing and gorgeous sepia-tone imagery on the handle. This unique knife ispart of the World at War Pocket Knife Collection, celebrating some of the most pivotal battles in history. Your limited-edition knife comes in a custom collector's box andincludes a Certificate of Authenticity.

At American Mint, Your Satisfaction is Guaranteed We're offering the one-of-a-kind Invasion of Normandy Pocket Knife for sale at a deeply discounted online price. You'll also get free shipping and handling if your order totals at least $150, as well asthe opportunity to pay in interest-free installments if you spend more than $100. Place your order today!