Everything You Need to Know About Double Eagle Coins

Ever since the passage of the Coinage Act of 1792, the U.S. Mint has been responsible for producing the coins used as the country's currency. The Act created the types of coins that were to be used and defined what they meant. Coins called "eagles" were made from gold, while dollars, half-dollars, quarters, dimes (called dismes in the Act), and nickels were made from silver. Cents and half-cent coins were made from copper.

What Is a Double Eagle Coin?

The face value of a double eagle gold coin is $20. The creation of the double eagle coin was a direct result of the Gold Rush in California. In 1848, gold was found at Sutter's Mill in California, triggering a massive migration of people to the western edge of the U.S. Between 1849 and 1852, more than $200 million worth of gold was mined from the ground. The influx of gold stimulated the U.S. economy and provided the Mint with the metal needed to produce double eagle coins.

Initially, double eagle gold coins were minted in New Orleans and Philadelphia. The U.S. Congress approved a branch location of the Mint in California in 1852, and in 1854, the San Francisco branch opened. During its first year, it minted more than $4 million worth of gold coins.

How Many Types of Double Eagle Coin Exist?

During the course of its existence, the double eagle coin has undergone at least one major facelift and several small adjustments. The two major categories of double eagle coin are Liberty Head and Saint-Gaudens. Within each category are multiple subsets, depending on when the coins were minted and what they featured in their designs.

When the Coinage Act of 1849 introduced the concept of the double eagle, the U.S. Mint needed a design for the new coin. James B. Longacre, who was one of the chief engravers at the U.S. Mint in Philadelphia, is credited with coming up with the design of the original Liberty Head Double Eagle Coin. Longacre is also credited with the design of the Indian Head Penny in 1859. The Double Eagle coin was his first design, and the creation of it wasn't without conflict.

Longacre landed his position at the Philadelphia branch of the Mint has a result of a connection to Senator John Calhoun of South Carolina. The director of the Philadelphia branch of the Mint didn't like Calhoun and tried to shut out Longacre. Due to what seemed to be interference from other employees at the Mint, it took Longacre three tries before a die for the coins could be properly cast. After the successful casting, Longacre sent the die to William Meredith, the Secretary of the U.S. Treasury, to get his opinion. Patterson tried to interfere to prevent Longacre's designs from coming to life and being turned into coins, but ultimately, his deceptions and attempts at sabotage were revealed, and Longacre, and his design, triumphed.

The first trial pattern Liberty Head coin was struck in February 1850 but imprinted with 1849 as the year. The coin still exists and is in the National Numismatic Collection at the Smithsonian.

The Liberty Head double eagle coin was available and used for commerce from 1850 until 1907. The coin got a slight makeover in 1866 when Longacre added "In God We Trust" to all U.S. coins. A decade later, a new designer, made "In God We Trust" more prominent on the reverse side. "Twenty D" was changed to "Twenty Dollars" on the reverse, and Lady Liberty underwent some slight adjustments as well.

Although the Liberty Head double eagle has its fans, President Theodore Roosevelt wasn't one of them. At the start of the 20th century, President Roosevelt announced that he believed U.S. coins were unattractive. He wanted American coins to undergo a renaissance. The country's coin should reflect its maturity and its commitment to democracy and liberty.

In 1905, President Roosevelt invited the sculptor Augustus Saint-Gaudens to redesign the country's coins, specifically gold coins. Despite having been insulted by the U.S. Mint in the past, Saint-Gaudens accepted the assignment and began working with Roosevelt and the Mint on the coins' redesign. The two were inspired by the coins used in Ancient Greece and Rome when creating the design.

Saint-Gaudens' design transformed Lady Liberty from just a head to an entire figure. She stands on the obverse side of the coin, her robes flowing. She holds an olive branch in one hand and a torch in the other. The number of stars surrounding the border of the coin increased from 13 to 46 as part of Saint-Gaudens' design. Each star represented a state in the U.S. at the time.

On the reverse of the coin, Longacre's passive eagle is replaced with an eagle in flight. The sun's rays stretch behind the bird, extending from a small circle at the bottom of the coin. Across the top of the reverse side are printed "United States of America" and "Twenty Dollars." "E. Pluribus Unum" was moved to the edge of the coin, rather than being printed on either side.

The Mint ended up producing two versions of the coin in 1907. The first had Roman numerals and a low relief. Around 12,000 coins were minted. The second low-relief version of the design swapped the Roman numerals for Arabic numbers and had an even lower relief. 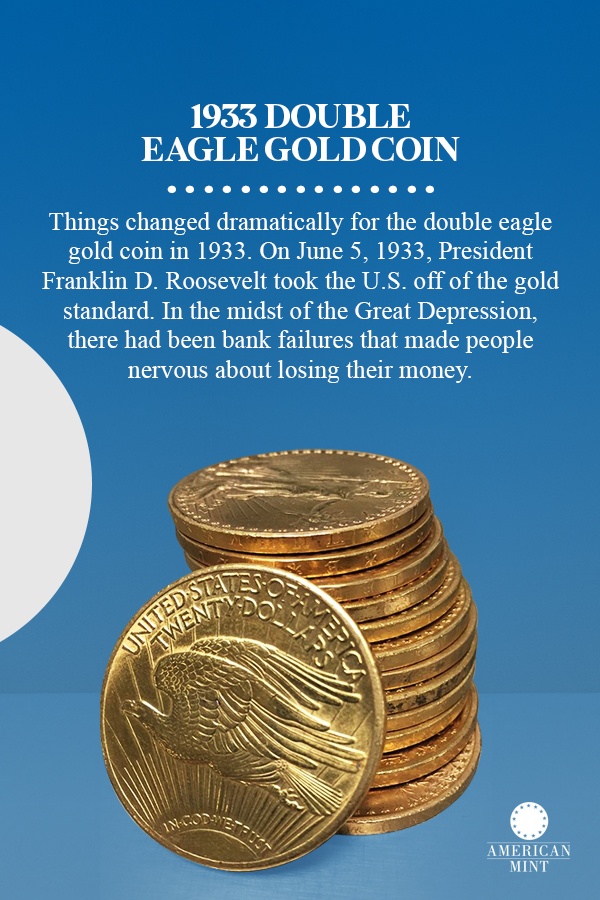 Things changed dramatically for the double eagle gold coin in 1933. On June 5, 1933, President Franklin D. Roosevelt took the U.S. off of the gold standard. In the midst of the Great Depression, there had been bank failures that made people nervous about losing their money. As a result, many began to hoard gold, depleting the reserves and making the depression worse. To prevent hoarding and to give the economy a boost, FDR ordered people to trade in their gold for other forms of currency. The gold ultimately ended up at Fort Knox, which is a storage facility for the U.S.' metal bullion reserves. Today, Fort Knox has 147.3 million ounces of gold.

FDR's decision not only changed how U.S. currency functioned. It also spelled the beginning of the end for the double eagle coin. In 1933, the U.S. Mint produced nearly 450,000 double eagle coins that year, none went into circulation after the gold standard ended.

The coins should have been melted down and sent to the bullion reserves. But, some escaped their fate and went underground. Two 1933 coins officially made it into the coin collection at the Smithsonian, but others have appeared in the years since. Those coins are thought to have been stolen by an employee of the Mint. The stolen coins ended up being sold to collectors around the world, including one belonging to the King of Egypt.

The 1933 Double Eagle coin's story extended beyond the middle of the 20th century. The coin that had been sold to the King of Egypt had made its way back to the U.S., and it ended up in the possession of the Treasury. It was kept in the Treasury's vaults, in the World Trade Center until July 2001, when it made its way to Fort Knox (and safety). A year later, in July 2002, the coin sold at auction for over $7 million. It ended up being put on display at the New York Historical Society.

Although both President Theodore Roosevelt and Saint-Gaudens wanted to produce a breathtakingly beautiful, ultra-high relief coin, the technology available at the time didn't make such a coin possible. Things changed in 2009, when the U.S. Mint went back to the drawing board and issued the Ultra High Relief Double Eagle Gold Coin. The 2009 coin features the design created by Saint-Gaudens in 1907.

To create the ultra-high relief, Ed Moy, the director of the U.S. Mint, had Saint-Gaudens' original plasters digitally mapped. A digitized design and die-making process finally allowed Saint-Gaudens' ultra-high relief to exist. The design of the coin was updated slightly to reflect the state of the U.S. in 2009. Four stars were added to the original 46 in the border of the obverse side of the coin. "In God We Trust" is also printed on the 2009 coin, but wasn't on the coin in 1907. The 2009 coin is made from 24-karat gold, which is softer and easier to work with compared to 22-karat gold.

The Ultra-High Relief coin went on sale on January 22, 2009, and it continued to be available for sale until the last day of 2009.

What Is a Double Eagle Commemorative Coin?

How Much Is a Double Eagle Coin Worth?

Factors that influence the value of a particular double eagle coin include the year it was minted and the location of the mint. Since many of the coins were melted down, originals from certain years can be difficult to find and usually have a price that matches their rarity.

The condition of a specific coin also affects its market value. Mint State or Uncirculated coins are usually in pristine condition and are often more valuable than coins in Extremely Fine or Very Fine condition.

You don't have to have a budget of millions of dollars to enjoy the beauty of Saint-Gaudens' 1907 double eagle coin or to bring home one of our attractive Liberty Head coin replicas. American Mint has a wide selection of double eagle commemorative coins for sale, including archival quality 1933 double eagle replicas. Browse our collection today and bring home a piece of American coinage history.