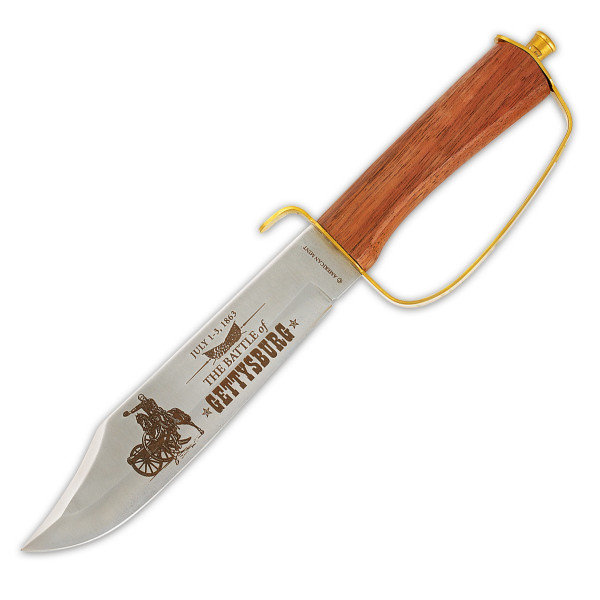 Includes a free preview of future issues in the collection America at War-Civil War Coll.. For more information, please refer to the Satisfaction Guarantee tab below. If you do not wish to preview future issues in the collection, you may purchase the single item using the 'Individual Item Only' tab at right.
Price $99.95 * $29.95
Total: $29.95
You save $70.00
Total: $99.95
Tweet
Share
Description Satisfaction Guarantee
Description
It was already hot at 8:00 in the morning on July 1, 1863, when two Confederate brigades under... more
Close menu
Battle of Gettysburg Bowie Knife

It was already hot at 8:00 in the morning on July 1, 1863, when two Confederate brigades under the command of General Henry Heth marched wearily North into the town of Gettysburg, Pennsylvania, insearch of food and badly needed supplies. Two Union cavalry brigades commanded by General John Buford were already ensconced in the small village. The skirmish that ensued lasted little more than anhour, but as reinforcements from both armies poured into the surrounding countryside, the stage was set for the largest, fiercest battle of the American Civil War.

Over the next three days,more than 170,000 Americans fought face-to-face for every inch of high ground. By the end of the battle on July 4th, 1863, the bodies of over 51,000 Union and Confederate soldiers were strewn over thelandscape. Each side had suffered terrible losses, but it was the Union army under the command of General George G. Meade that triumphed. The Confederate army, led by General Robert E. Lee, never fully recovered from the defeat at Gettysburg. Three of the bloodiest days in American history had turned the tide of the entire war.

Now, American Mint - in conjunction with The National CivilWar Museum - has created a magnificent bowie knife commemorating all of the Americans who fought in the Battle of Gettysburg.

Available exclusively from American Mint, this magnificent bowie knife has been meticulously designed in conjunction with The National Civil War Museum for the Sesquicentennial of the Civil War. Crafted in 420 stainless steel, this 150th Anniversary bowie knifeis a full 14 1.2" in length. The 8 1.4" polished steel blade commemorates the Battle of Gettysburg with a tribute that includes an image of legendary Confederate General Robert E. Lee. The handle is asolid piece of fine-grained walnut with a golden-finished titanium pommel guard reminiscent of a Civil War officerfs sword. This limitededition bowie knife comes in a custom collector's box and includes a Certificate of Authenticity, assuring quality and value for generations to come.