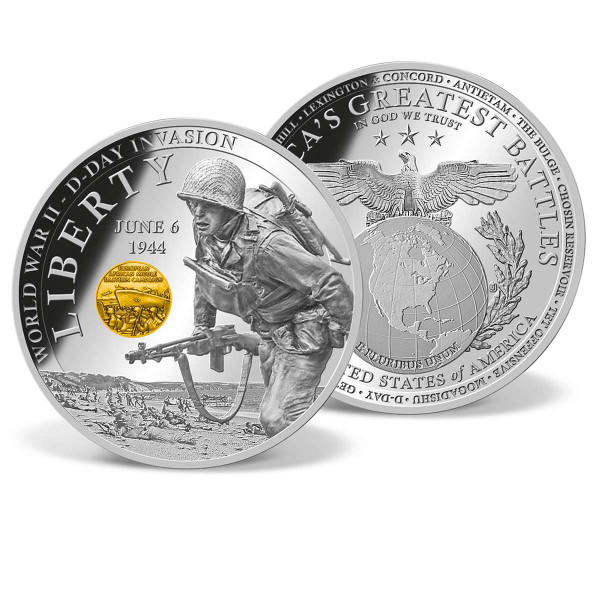 The Battle of Normandy was the Allied invasion of Nazi-occupied France during World War II. Commonly referred to as D-Day, the invasion remains the largest seaborne invasion in the annals of warfare. More than 156,000 troops from Britain, Canada, and the United States crossed the English Channel and landed on the beaches of Normandy. When Allied forces stormed the heavily fortified shores and completely overwhelmed the German defenses, it marked the beginning of the end of World War II in Europe. Allied Forces suffered nearly 10,000 casualties with more than 4,000 dead. Yet, due to the valor and sacrifice of the men who charged into the wall of bullets, the beaches were secured and the Allies began their march across Europe and onto victory in World War II.

The D-Day Coin From American Mint Pays Tribute to This Pivotal WWII Victory American Mint is proud to offer the beautiful World War II D-Day Invasion Commemorative Coin as a way to honor our brave warriors many of whom paid the ultimate price and helped alter the course of history. Luxuriously plated in .999 silver and featuring an eye-catching 24K gold accent on the obverse, our D-Day coin is a "must" for any WWII aficionado. The coin's reverse bears the legend "America's Greatest Battles" and includes a stunning depiction of a bald eagle perched majestically atop the globe, symbolizing America'srole in maintaining freedom around the world.

Order Your D-Day Coin While They Last We have limited the minting of the World War II  D-Day Invasion Commemorative Coin to 9,999complete collections worldwide, so don't wait to add this compelling piece to your collection. Order yours online at a deeply discounted price today! If you'd like to add more commemorative coins orother collectibles to your order, you might qualify for free shipping and handling, which applies to all purchases of at least $150. Spend more than $100, and you can get the convenience of paying ininterest-free monthly installments as well.

Ordering a D-Day Silver-Plated Coin is Fast, Easy, and Secure Our simple, secure online ordering process makes buying a D-Day commemorative coin from American Mint a hassle-free process. If you have questions or need assistance, you can call our customer service team at 1-877-807-MINT from 8 a.m. to 8 p.m. EST Monday through Friday.