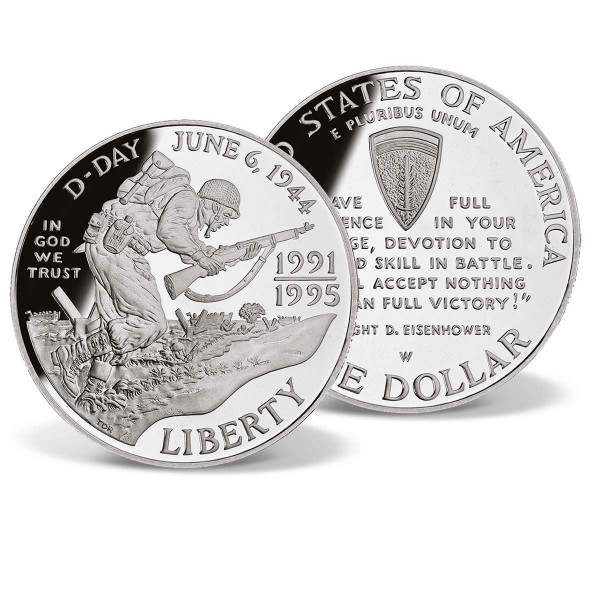 Includes a free preview of future issues in the collection Military Commem. Coins. For more information, please refer to the Satisfaction Guarantee tab below. If you do not wish to preview future issues in the collection, you may purchase the single item using the 'Individual Item Only' tab at right.
Price $99.95 * $49.95
Total: $49.95
You save $50.00
Total: $99.95
Tweet
Share
Description Satisfaction Guarantee
Description
On June 6, 1944, 160,000 Allied troops landed along a 50-mile stretch of heavily fortified... more
Close menu
World War II - D-day 50th Anniversary Silver Dollar

On June 6, 1944, 160,000 Allied troops landed along a 50-mile stretch of heavily fortified French coastline to fight Nazi Germany on the beaches of Normandy, France. Masterminded by General DwightD. Eisenhower, the coordinated attack known as Operation Overlord used more than 5,000 ships, 11,000 aircraft, and 150,000 men from 12 countries. The Allied Forces had suffered nearly 10,000 casualties with more than 4,000 dead. Yet, with precise planning and preparation and due to the valor and sacrifice of the men, the beaches were secured and the Allied Forces began their march across Europe to victory.

As a tribute to the "Greatest Generation" and all the brave men and women who served in World War II, the U.S. Mint issued special commemorative silver dollars bearing thedual dates 1991-1995 to honor the 50th Anniversary of U.S. involvement in World War II. These 90% pure silver coins, featuring a U.S. soldier coming ashore during the D-Day invasion of Normandy on theobverse, have become highly coveted among collectors for the magnificent imagery and historical subject matter.