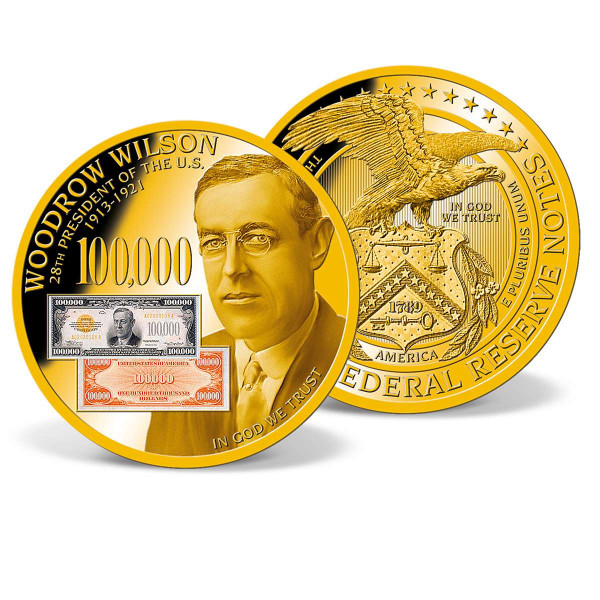 Includes a free preview of future issues in the collection President Federal Reserve Note. For more information, please refer to the Satisfaction Guarantee tab below. If you do not wish to preview future issues in the collection, you may purchase the single item using the 'Individual Item Only' tab at right.
Price $99.95 * $9.95
Total: $9.95
You save $90.00
Total: $99.95
Tweet
Share
Description Satisfaction Guarantee
Description
As President, Woodrow Wilson managed to enact several major progressive reforms including the... more
Close menu
Woodrow Wilson - 1934 $100,000 Gold Certificate Commemorative Coin

As President, Woodrow Wilson managed to enact several major progressive reforms including the Federal Reserve Act, the Federal Trade Commission Act, and legislation to prevent child labor. In 1917,Wilson decided that the U.S. could no longer remain neutral during the ongoing World War and asked Congress to declare war. As the Allied Powers moved towards victory, Wilson personally took controlof negotiations for peace, championing creation of the League of Nations and the Treaty of Versailles at the Paris Peace Conference.

The $100,000 gold certificate was only produced in 1934and were never allowed to be privately owned. When the government stopped using them in the early 1960s, they destroyed all but a few specimens that were archived. Now, you can add one of these incredible gold certificates to your own collection with this AMERICAN MINT EXCLUSIVE tribute! Meticulously designed, this magnificent commemorative coin is layered in 24k gold and features a full-color reproduction´of the unattainable 1934 $100,000 Gold Certificate. Minted to the highest quality "Proof" standard, it comes in its own protective capsule to preserve it for future generations.