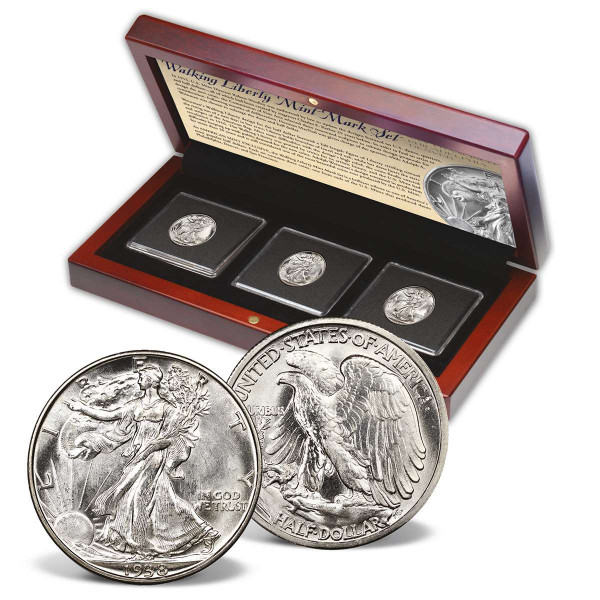 In 1915, U.S. Mint Director Robert W. Woolley offered the opportunity to prepare designs for three silver coins to noted sculptors Adolph A. Weinman, Albin Poales, and Herman A. MacNeil. Weinman ended up having two of his designs chosen to become new U.S. coins. One was the Mercury Dime - famous in its own right - and the other would become known as the Walking Liberty Half Dollar.

Weinman described the obverse of his new half dollar design as "a full length Liberty, the fold of the stars and stripes flying to the breeze as a background, progressing in full stride toward the dawnof a new day, carrying branches of laurel and oak symbolical of civil and military glory. The hand of the figure is outstretched in bestowal of the spirit of liberty." The reverse features an eagle perched high upon a mountain with his wings unfolded, fearless in spirit and conscious of his power. Springing from a rift in the rock is a sapling of mountain pine to symbolize the nation, still in theformative years of a long existence. These strongly patriotic themes resonated perfectly across a nation on the brink of World War I.

The Walking Liberty Half Dollar made its debut in 1916and was immediately embraced by the public. The stirring, patriotic design would remain in production until 1947, when it was replaced by the Franklin Half Dollar. In 1986, Weinman's exquisite WalkingLiberty design was brought out of retirement to grace the obverse of the Mint's new Silver Eagle Bullion Coin.