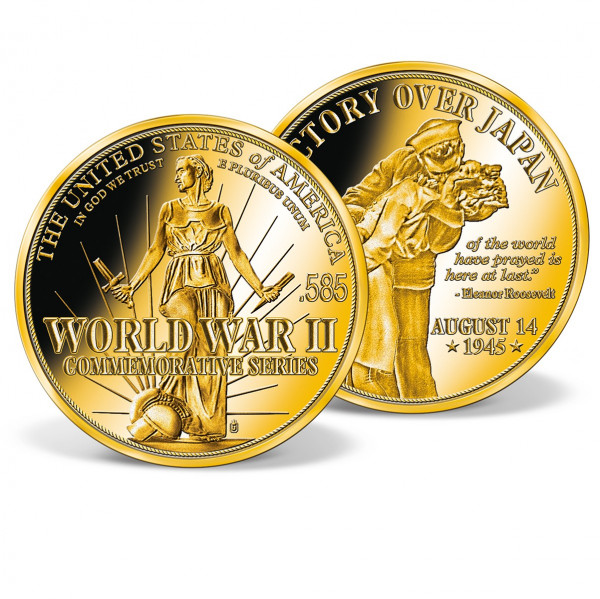 The United States' involvement in the Second World War lasted from 1941-1945. While the combined efforts of the U.S. and its allies prevented the Axis forces of Germany, Italy, and Japan from achieving world dominance, it came with a high price.

By August of 1945, Japan was facing major destruction from Allied forces. The Japanese navy had been largely put out of commission and an Allied invasion was being prepared. Still, Japan refused to end the war until they experienced the devastation of America's atomic bombs. Just ten days after the first bomb hit Hiroshima, Emperor Hirohito officially surrendered and agreed to the Allied demands.

The Victory Over Japan Gold Coin From American Mint Pays Tribute to This Pivotal Moment in WWII History American Mintis proud to offer the beautiful Victory Over Japan Commemorative Coin as a way to honor our brave warriors - many of whom paid the ultimate price and helped alter the course of history. Struck in stunning .585 solid gold, our Victory Over Japan coin is a "must" for any WWII aficionado. The coin's obverse depicts the famous Times Square kiss along with a quote from Eleanor Roosevelt, while the reverse bears the legend "World War II Commemorative Series".

Order Your Victory Over Japan Solid Gold Coin While They Last We have limited the minting of the World War II VictoryOver Japan Commemorative Gold Coin to 9,999 complete collections worldwide, so don't wait to add this compelling piece to your collection. Order yours online at a deeply discounted price today!

If you'd like to add more commemorative coins or other collectibles to your order, you might qualify for free shipping and handling, which applies to all purchases of at least $150. Spend more than $100, and you can get the convenience of paying ininterest-free monthly installments as well.

Ordering a Victory Over Japan Solid Gold Coin is Fast, Easy, and Secure Our simple, secure online ordering process makes buying this unique Victory Over Japan commemorative gold coin from American Mint a hassle-free process. If you have questions or need assistance, you can call our customer service team at 1-877-807-MINT from 8 a.m. to 8 p.m. EST, Monday through Friday.