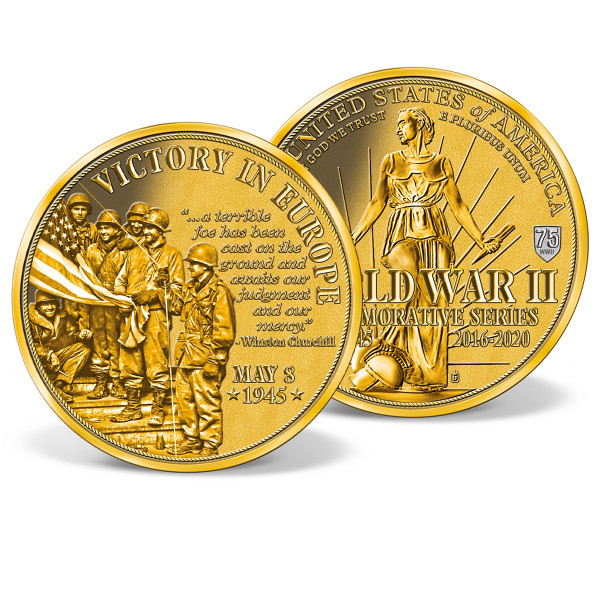 Includes a free preview of future issues in the collection World War II Reverse Proof. For more information, please refer to the Satisfaction Guarantee tab below. If you do not wish to preview future issues in the collection, you may purchase the single item using the 'Individual Item Only' tab at right.
Price $79.95 * $19.95
Total: $19.95
You save $60.00
Total: $79.95
Tweet
Share
Description Satisfaction Guarantee
Description
The United States' involvement in the Second World War lasted from 1941-1945. While the combined... more
Close menu
Victory in Europe Commemorative Coin

The United States' involvement in the Second World War lasted from 1941-1945. While the combined efforts of the U.S. and its allies prevented the Axis forces of Germany, Italy, and Japan from achieving world dominance, it came with a high price. More than 418,000 Americans lost their lives on the battlefields of Europe, North Africa, and Asia during those four tumultuous years.

In April 1945, Allied forces moved west toward Berlin as the Russian army advanced from the east. On April 25, American and Soviet forces met at the Elbe River. Five days later, Adolf Hitler committed suicide in his bunker in Berlin. The unconditional surrender of Germany was signed on May 7 by Hitler's successor Admiral Karl Doenitz. The surrender took effect at 11:01 p.m. on May 8, bringing twelve years of Nazi rule to an end.

The Victory in Europe Coin From American Mint Pays Tribute to This Pivotal Moment in WWII History American Mint is proud to offer the beautiful Victory in Europe Commemorative Coin as a way to honor our brave warriors - many of whom paid the ultimate price and helped alter the course of history. Luxuriously layered in 24k gold, our Victory in Europe coin is a "must" for any WWII aficionado. The coin's obverse depicts soldiers holding an American flag along with a quote from Winston Churchill, while the reverse bears the legend "World War II Commemorative Series".

Order Your Victory in Europe Coin While They Last We have limited the minting of the World War II Victory in Europe Commemorative Coin to 9,999 completecollections worldwide, so don't wait to add this compelling piece to your collection. Order yours online at a deeply discounted price today! If you'd like to add more commemorative coins orother collectibles to your order, you might qualify for free shipping and handling, which applies to all purchases of at least $150. Spend more than $100, and you can get the convenience of paying ininterest-free monthly installments as well.

Ordering a Victory in Europe 24k Gold-layered Coin is Fast, Easy, and Secure Our simple, secure online ordering process makes buying this unique Victory in Europe commemorative coin from American Mint a hassle-free process. If you have questions or need assistance, you can call our customer service team at 1-877-807-MINT from 8 a.m.to 8 p.m. EST Monday through Friday.