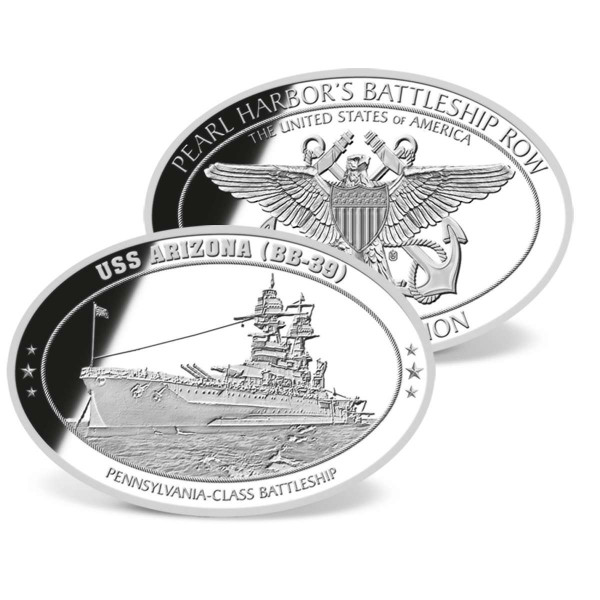 Includes a free preview of future issues in the collection Pearl Harbor's Battleship Row. For more information, please refer to the Satisfaction Guarantee tab below. If you do not wish to preview future issues in the collection, you may purchase the single item using the 'Individual Item Only' tab at right.
Price $129.95 * $19.95
Total: $19.95
You save $110.00
Total: $129.95
Tweet
Share
Description
Description
On Sunday, December 7, 1941, shortly before 8 a.m., Japanese dive bombers struck the Pacific... more
Close menu
USS Arizona Oval Commemorative Coin

On Sunday, December 7, 1941, shortly before 8 a.m., Japanese dive bombers struck the Pacific Fleet as it lay in port at Pearl Harbor on the island of Honolulu, Hawaii. Lasting just under two hours, the bombing sank or damaged 21 U.S. vessels, including eight battleships, and killed or wounded more than 3500 Americans. The two ensuing attack waves wrought devastation on the line of 8 U.S. Navyships along Battleship Row.

The next day, the U.S. entered World War II, declaring war on Japan. Today, the battleships that took the brunt of the Japanese attack -- and the brave men and women who served as their crew -- are memorialized so that they might never be forgotten.

The USS Arizona was one of the ships sunk in the first 10 minutes of the attack, taking 1,177 lives.The wreckage of the ship remains just below the water's surface and serves as the foundation for the USS Arizona Memorial.

Available exclusively from American Mint, this magnificent silver-layered coin pays tribute to the legendary ship and honors the lives lost on that fateful "Day of Infamy."