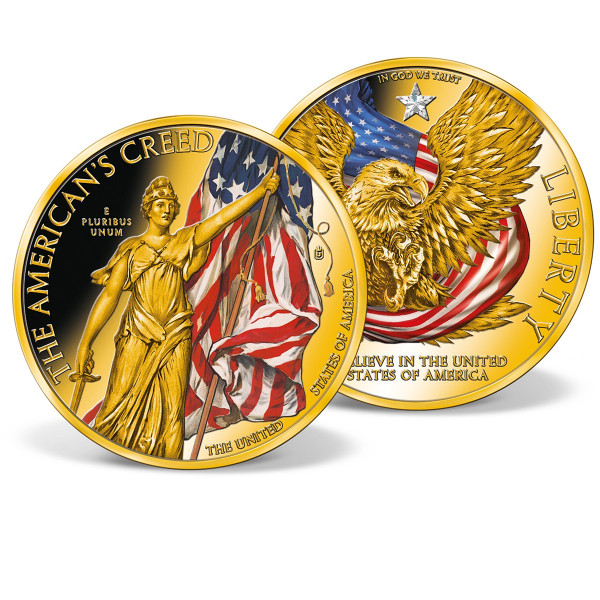 Includes a free preview of future issues in the collection The American's Creed - WFTF. For more information, please refer to the Satisfaction Guarantee tab below. If you do not wish to preview future issues in the collection, you may purchase the single item using the 'Individual Item Only' tab at right.
Price $89.95 * $19.95
Total: $19.95
You save $70.00
Total: $89.95
Tweet
Share
Description Satisfaction Guarantee
Description
In 1917, a national essay contest was held to develop an American's Creed and stoke the fire of... more
Close menu
United States of America Commemorative Coin

In 1917, a national essay contest was held to develop an American's Creed and stoke the fire of patriotism as the nation entered into World War I. In the words of the contest winner, William TylerPage, the American's Creed "...is a summary of the fundamental principles of American political faith as set forth in its greatest documents, its worthiest traditions, and by its greatest leaders." His short but powerful essay was selected as the winning entry. The House of Representatives had a bronze tablet of Page's "The American's Creed" placed in the Capitol in 1918.

I believe in the United States of America as a government of the people, by the people, for the people; whose just powers are derived from the consent of the governed; a democracy in a republic; a sovereign nation of many sovereign states; a perfect union, one and inseparable; established upon those principles of freedom, equality, justice, and humanity for which American patriots sacrificed their lives and fortunes. I therefore believe it is my duty to my country to love it, to support its Constitution; to obey its Laws; to respect its Flag; and to defend it against all enemies.
The American's Creed by William Tyler Page

Available exclusively from American Mint, this patriotic coin is minted to the highest quality "Proof" standard and layered in brilliant 24k gold. The obversefeatures a highly detailed American Eagle grasping a flowing American flag that is brilliantly accented in full color. To create a truly exceptional work of art, a sparkling SWAROVSKI® crystal star is hand-set into the obverse's mirror like surface. The reverse features a classic Lady Liberty proudly holding aloft a full color flag.