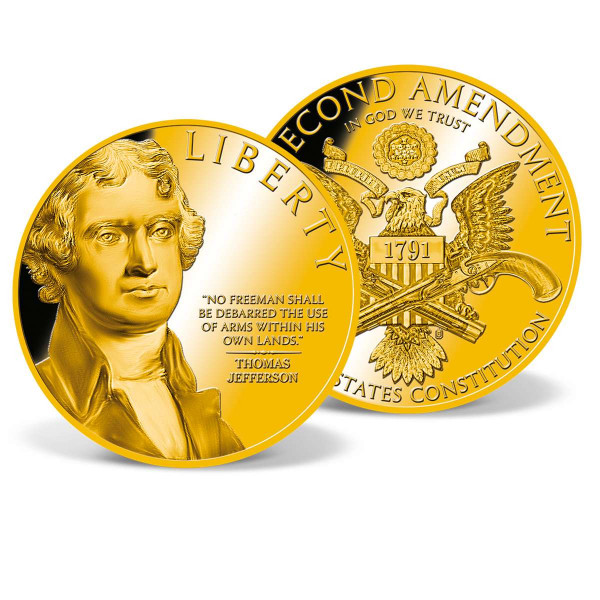 Thomas Jefferson - one of the most important and influential men in the founding of our nation Thomas Jefferson - author of the Declaration of Independence and the third President of the United States - gave voice to the aspirations of a new America. As a member of the Continental Congress, he was chosen in 1776 to draft the Declaration of Independence because of his eloquent way with words aswell as his firm beliefs in the unalienable rights of every man and woman. It was his political ideals and staunch support of an individual's rights that led James Madison to seek Jefferson's consel when drafting the U.S. Constitution - the document that would form the United States of America. Jefferson recognized a need for amendments to the Constitution that would guarantee protections to the individual against government overreach. In a letter to Madison written in 1787, Jefferson warned of the need for a Bills of Rights that would spell out these rights rather than leave them open to theinterpretation of the government. "A Bill of Rights is what the people are entitled to against every government on earth, general or particular; and what no just government should refuse, or rest on inferences."

The Bill of Rights protects the inherent freedoms of every U.S. citizen to pursue a life of their choosing. These additions to the Constitution essentially created a government that is truly by the people, for the people. The Second Amendment assures the right to protect and defend against threats both foreign and domestic.

The U.S. Constitution was written in the summer of 1787. Its purpose was to create a federal government while preserving the powers of individual states. By 1788, nine states had ratified the Constitution, but called for amendments that limited the powers of the federal government and protected the individual rights of all citizens. The debate over the amendments raged on in Congress for over a year. Finally, in 1789, James Madisonpresented ten amendments that would guarantee individual and state rights, protecting them from federal government overreach. Appropriately entitled the Bill of Rights, these ten amendments were ratified in 1791 and have become a beacon to all men and women who value freedom.

The Second Amendment - The Right to Bear Arms
Having won our independence with everyday citizens whowere able to stand up, arm themselves, and fight, the Founding Fathers understood the importance of being able to protect yourself, your property, and those you love. The right of law-abiding citizens to own guns is guaranteed in Second Amendment.