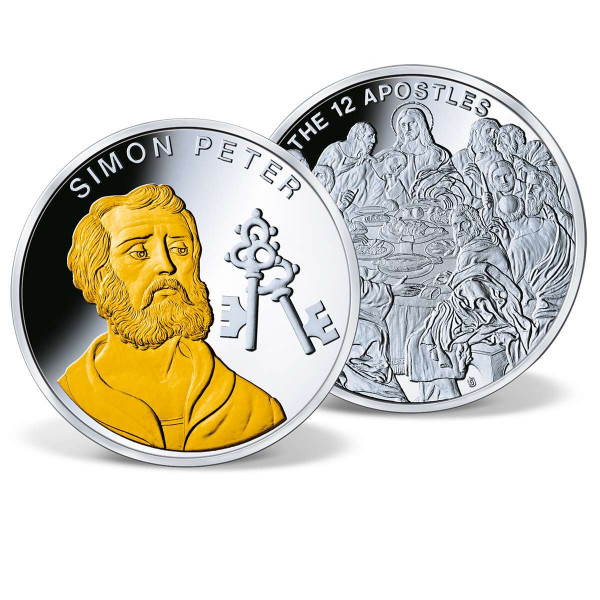 Total: $89.95
Tweet
Share
Description
Description
The Apostle Peter may have been the most outspoken of Jesus' twelve Apostles; he certainly... more
Close menu
The Twelve Apostles - Simon Peter Commemorative Coin

The Apostle Peter may have been the most outspoken of Jesus' twelve Apostles; he certainly became one of the boldest witnesses for the faith. Born with the name Simon, it was Jesus who gave Peter his new name and made him the leader of the Apostles who included: his brother, Andrew; James the Greater; Judas Iscariot; Thomas; Simon; James the Less; Matthew; Andrew; Thaddeus; and Bartholomew. Peter was an eloquent and dramatic speaker and an inspirational leader of men. Despite his moments of weakness where he denied Jesus three times during Christ's trial and crucifixion, Peter was given the"Keys to the Kingdom of Heaven" and the responsibility to care for the flock after Jesus returned to Heaven.

Available exclusively from American Mint, this large coin is an impressive 2" indiameter and is plated in .999 pure silver. Minted to the highest quality "Proof" standard, it features an intricately sculpted portrait of the Apostle Peter that is accented in 24k gold on the obverse and a highly detailed engraving of the Last Supper on the reverse. It comes in its own protective capsule to preserve it for future generations and is backed by American Mint's 100%satisfaction guarantee.