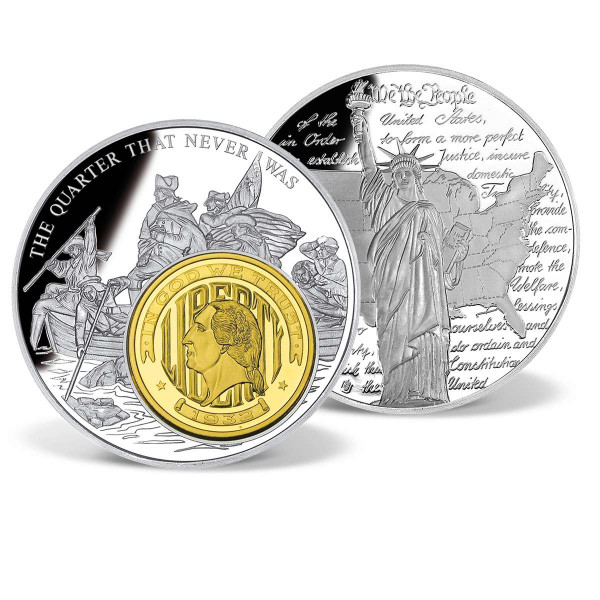 Includes a free preview of future issues in the collection Quarters of the Fifty States. For more information, please refer to the Satisfaction Guarantee tab below. If you do not wish to preview future issues in the collection, you may purchase the single item using the 'Individual Item Only' tab at right.
Total: $19.95
Total: $19.95
Tweet
Share
Description Satisfaction Guarantee
Description
In 1932 our country honored the 200th anniversary of George Washington's birth. A competition was... more
Close menu
The Quarter That Never Was Commemorative Inlay Coin
In 1932 our country honored the 200th anniversary of George Washington's birth. A competition was held for the design of a new quarter dollar with his image. The beautiful portrait you see on the coinwas submitted by the artist Thomas Cremona and features a large Victorian bust of our first President. Only a few pattern coins were struck in 1932 for the purpose of accepting the design. However,the coin never made it into circulation and the few pieces struck disappeared in the pockets of some privileged insiders. Whether you are a first-time coin buyer or have been collecting commemorative coins and medals for years, you'll be proud to place this piece at the very center of your collection. Carefully designed and minted to the highest standards, it features a bust of George Washington, our first President. Coins are fascinating because they often reflect stories of royalty, great leaders, and history. Famous figures become real and alive when depicted on an old coin. For example, Julius Caesar and Alexander the Great, in ancient times; Henry VIII, Napoleon, and George Washington more recently. Just as nearly every family has its "black sheep", so, too does virtually every coin series has it's failures. These are known as errors or mis-struck coins, or, for some reason, simply never made it into circulation. Just like the 1932 Washington Quarter. Both their scarcityand novelty attract new coin collectors every year.