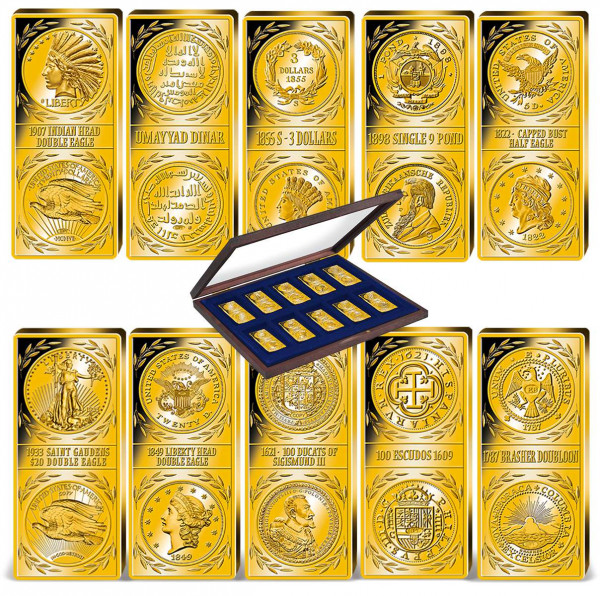 Total: $799.00
Tweet
Share
Description
Description
They are the most valuable gold coins ever - with a combined value estimated to be over $88... more
Close menu
The Million Dollar Complete Ingot Collection

They are the most valuable gold coins ever - with a combined value estimated to be over $88 MILLION!

1933 Saint-Gaudens Double Eagle
When America banned private ownership of gold in 1933, only a handful of Gold Double Eagles escaped the melting pot. Two were sent to the Smithsonian and a handful were secreted away by the Mint's chief cashier. One missing coin resurfaced atauction where it sold for a record $18,870,000!

1621 100 Dukaten Sigismund III
This Polish coin was minted with nearly one troy ounce of pure gold! A special issue celebratingthe Polish victory over the Turks at the Battle of Chocim, only 3 original specimens are known to exist today. In 2008, one of these coins sold for an incredible $1,380,000!

1822 CappedBust Half Eagle
One of the rarest and most desirable American gold coins, only 3 original $5 Capped Bust gold coins are known to still exist. Two reside in the National Numismatic Collectionat the Smithsonian and one currently sits in a private collection. That sole coin is worth an estimated $7,652,000!

1855-S Indian Head 3-Dollar
Minted with gold from the California Gold Rush, these odd-denomination coins are thought to have originally been produced to be used for postage stamps. Minted in small quantities, the vast majority of original specimens have been melted down over the last 150+ years. One survivor sold in 2011 for $1,322,500

1907 Indian Head Double Eagle
In 1907, Augustus Saint-Gaudens created new designs for America's goldcoins. One of the test coins featured the Indian Head design from the Eagle with the reverse of the Double Eagle. This pattern coin is privately owned and has an estimated value of $20,000,000!

1609 Spanish 100 Escudos
The largest gold coin of its time, the 100 escudos was minted to be used as rewards for select people in Spanish King Philip III's inner circle. One of these golden treasures sold in 2011 for an unbelievable $1,100,000!

1787 Brasher Doubloon
Before there was a U.S. Mint, a goldsmith named Ephraim Brasher hand-stamped gold coins. With only 7 known specimens known to still exist, only one bears the minter's initals on the eagle's breastplate and it sold for an astounding $7,960,000!

1849 Liberty Head Double Eagle
The first gold Double Eagle ever minted in the U.S. was minted in 1849. However, only one coin was produced as a pattern. That sole existing specimen now resides in the Smithsonian Institution and cannot be sold, but experts estimate its value at $20,000,000!

1898 Single 9 South African Pond
South Africa began minting its own coinage in 1899. When the dies for the 1-pound coin were confiscated, old dies were modified with the new year. One specimen was misprinted. In 2010, this "mistake" sold at auction for $4,000,000!

Umayyad Dinar
Minted in 723 AD, this gold dinar is from the Ummayad Dynasty  the family of Muhammad, founder of Islam - recently sold at auction for an incredible $6,029,500!

A tribute to some of the most coveted goldcoins in the world, the Million Dollar commemorative ingot set features ten finely minted "Proof" quality ingots. Luxuriously layered in 24k gold, this stunning ingot set showcases classic rare gold coins from around the world such as the U.S. 1933 Saint Gaudens Double Eagle, the Mexican 1609 100 Escudos, the South African 1898 Single 9 Pond, the U.S. 1787 Brasher Doubloon, and more.