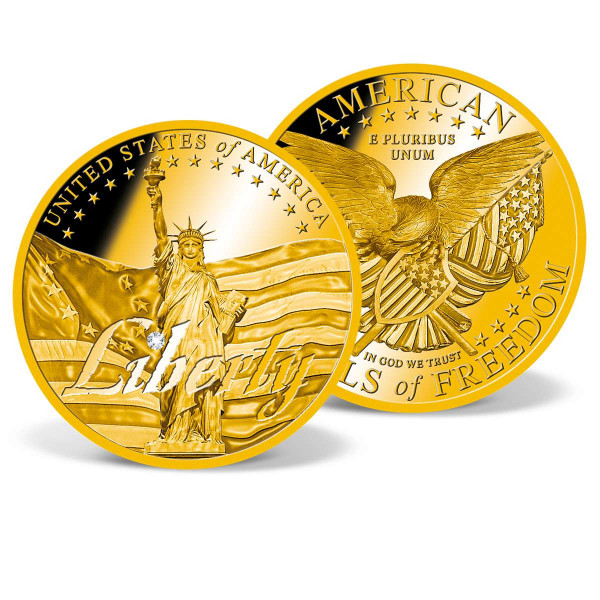 Includes a free preview of future issues in the collection Freedom Symbols Colossal Coins. For more information, please refer to the Satisfaction Guarantee tab below. If you do not wish to preview future issues in the collection, you may purchase the single item using the 'Individual Item Only' tab at right.
Price $129.95 * $19.95
Total: $19.95
You save $110.00
Total: $129.95
Tweet
Share
Description Satisfaction Guarantee
Description
She stands more than 300 feet tall and is recognized around the world as the quintessential... more
Close menu
The Liberty - Symbols of Freedom Crystal Inlay Commemorative Coin

She stands more than 300 feet tall and is recognized around the world as the quintessential symbol of freedom and American values. The Statue of Liberty has welcomed countless immigrants and visitors to America since her dedication on October 28, 1886. Officially entitled "Liberty Enlightening the World," she was a gift from the people of France to the United States for the centennial celebration of America's independence. From her golden torch that lights the path to freedom . . . to the broken chains of oppression that lay around her feet . . . the Statue of Liberty represents everythingthat makes America the greatest nation on earth.

Today, more than 130 years after her historic dedication, Lady Liberty continues to watch over New York City, lighting the way for a world insearch of freedom.

This colossal 24k gold-layered coin is a stirring tribute to our nation's greatest symbol of freedom. Minted to the highest quality "Proof" standard, its patriotic imagery is accented with a genuine Swarovski crystal. Available exclusively from American Mint, this massive work of coin art is limited to only 9,999 complete collections worldwide.