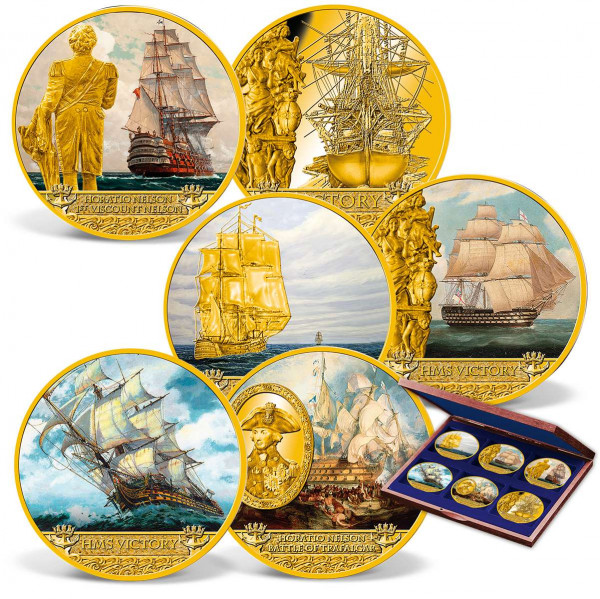 Launched on May 17, 1765, the HMS Victory was a 104-gun, first-rate ship of the Royal Navy. Over an unusually long service to the crown, she gained legendary status leading British fleets in theAmerican War of Independence (1775-1783), the French Revolutionary War (1793-1802), and the Napoleonic War (1803-1815). In October 1805, she achieved everlasting fame as the flagship of Vice-Admiral Nelson in the greatest naval victory in British history over the combined fleets of France and Spain at the Battle of Trafalgar.

Available in the U.S. exclusively from American Mint, these exquisite coins are meticulously designed by our partners at Great Britain's prestigous Windsor Mint for the HMS Victory's 250th Anniversary. Each coin is a massive 2" in diameter and luxuriously layered in 24k gold. Minted to the highest quality "Proof" standard, the coins feature highly detailed engravings celebrating the HMS Victory. Five of the coins feature dramatic full-color images of this historic ship. These limited-edition masterpieces are encased in individual protective capsules to preserve their golden luster and brilliant color for future generations.