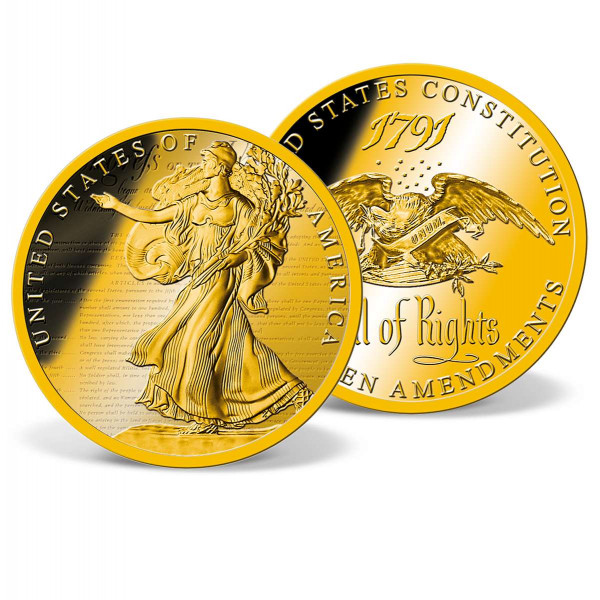 Includes a free preview of future issues in the collection Charters of Freedom. For more information, please refer to the Satisfaction Guarantee tab below. If you do not wish to preview future issues in the collection, you may purchase the single item using the 'Individual Item Only' tab at right.
Price $129.95 * $19.95
Total: $19.95
You save $110.00
Total: $129.95
Tweet
Share
Description Satisfaction Guarantee
Description
In 1787, as our Founding Fathers debated the ratification of the Constitution - the very... more
Close menu
The Bill of Rights Commemorative Coin

In 1787, as our Founding Fathers debated the ratification of the Constitution - the very document that would serve as the foundation for the federal government - they fretted over a government withtoo much authority. It became apparent that amendments would need to be added to ensure an individual's rights and freedoms. The first 10 amendments became known as the Bill of Rights and establishedlimits to the powers of the federal government and protected the individual rights of all citizens.

Introduced by James Madison during the Philadelphia Convention, the Bill of Rights makesup the First Ten Amendments of the U.S. Constitution. These ten amendments call for the guarantee of personal liberties such as freedom of speech and religion, a person's right to due process, as wellas dictating which legal issues the federal and state governments would handle. Today, the Bill of Rights continues to serve as the bedrock of America's democracy.

Our Bill of Rights Commemorative Gold-Layered Coin Pays Tribute to the 10 Amendments At American Mint, we're proud to offer our glittering Bill of Rights commemorative coin that honors the enduring legacy of these nation-shaping amendments ratified by the U.S. Congress in 1791. Layered in 24k gold, this proof-quality piece's obverse features an exquisitely detailed image of Lady Liberty with the Bill of Rights etched in the background. The reverse depicts an American eagle with a banner that reads "E Pluribus Unum," the de facto motto of the United States for many years.

We've Minted the 1791Bill of Rights Coin to the Highest Standards As with all of our collectibles, the Bill of Rights coin meets the high standards for quality that our customers demand. We craft each piece with care while paying close attention to every detail. We want you to take as much pride in owning and displaying our coins as we do in bringing them to you! You'll also receive a Certificate of Authenticity that certifies the size and materials and contains historical information about the item.

You'll Save Money When You Buy From American Mint We're offering the Bill of Rights gold-layered coin for sale at a deeply discounted online price. You'll also get free shipping and handling on all orders of at least $150, as well as the option to pay in interest-free monthly installments if you spend more than $100.

Place your order today, and feel free to call us at 1-877-807-MINT if you need assistance.