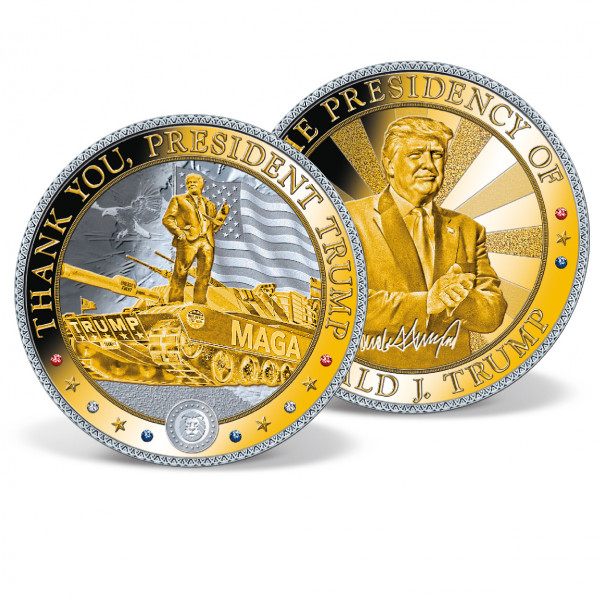 From his first day as President, Donald Trump took the bold actions needed to "Make America Great Again" - just as he promised during his historic campaign. He stood firmly in his belief that the U.S. is the greatest nation in the world and that when its people work toward a common goal, we can restore America's standing as a beacon of freedom, strength, and prosperity. From a booming economy to decisive actions to protect our nation against foreign forces who seek to do us harm, President Trump proved time after time that his commitment to putting America first was exactly what our nationneeded.

President Donald Trump Commemorative Coin for Sale Available exclusively from American Mint, this exquisite coin is brilliantly layered in 24k gold with spot silver and Swarovski crystals and features a highly detailed image of President Donald Trump standing on top of a MAGA tank! This one-of-a-kind commemorative is sure to make a strong impression in any collection.

Minted to the highest quality "Proof" standard, this coin is a treasured keepsake of this pivotal time in our nation's history. It comes in a protective shell to preserve it for future generations. You'll also receive a Certificate of Authenticity that certifies the size and materials and includes historical information about the item.

Order Your President Donald Trump Commemorative Coin Today! We're offering this one-of-a-kind Donald Trump commemorative coin for sale at a deeply discounted online price. You'll also get free shipping and handling if your order totals at least $150, as well as the opportunity to pay ininterest-free installments if you spend more than $100. Place your ordertoday!