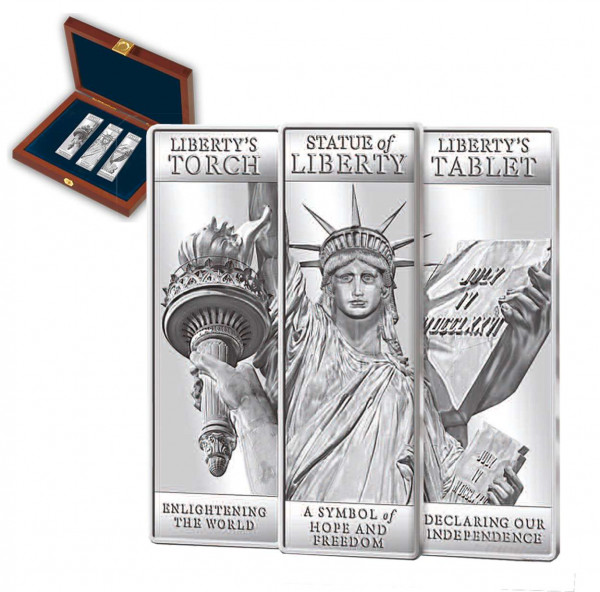 Total: $585.00
Tweet
Share
Description
Description
A gift from the people of France to the United States in honor of the centennial celebration of... more
Close menu
Statue of Liberty Limited Edition First Strike Ingot Set

A gift from the people of France to the United States in honor of the centennial celebration of America's independence, the Statue of Liberty is recognized around the world as the quintessential symbol of freedom. This three-piece set showcases our stunning First Strike Edition ingots, minted in .999 fine silver, which each feature meticulously designed images of the Statue of Liberty. Limitedto just 250 sets worldwide, this is a striking tribute to the 125th Anniversary of this beloved symbol of Democracy.

The special First Strike Edition is comprised of only the first 250 of each ingot minted from this brand new die set. Knowledgeable collectors know that the first ingots struck out of a new die set have the clearest and sharpest detail in a minting run. Only these 250 ingot sets will feature our exclusive First Strike Mint Mark, authenticating it as a First Strike. Once this special edition of 250 sets has been minted, the Mint Mark will be permanently removed from each die and no future issue of these ingots will carry the mark. Adding to the exclusivity of this unique production run, each ingot in this First Strike edition set is minted in .999 fine silver. Thisis truly a unique and exclusive opportunity to acquire a very rare and sought after piece.