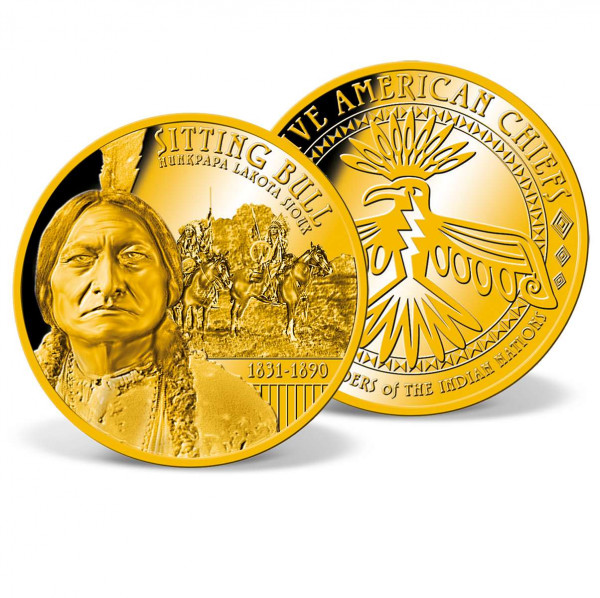 Includes a free preview of future issues in the collection Native American Chiefs. For more information, please refer to the Satisfaction Guarantee tab below. If you do not wish to preview future issues in the collection, you may purchase the single item using the 'Individual Item Only' tab at right.
Price $79.95 * $19.95
Total: $19.95
You save $60.00
Total: $79.95
Tweet
Share
Description Satisfaction Guarantee
Description
Sitting Bull, or Tatanka Iyotanka in his native language, was a Teton Dakota Native American... more
Close menu
Sitting Bull Commemorative Coin

Sitting Bull, or Tatanka Iyotanka in his native language, was a Teton Dakota Native American chief. He served as a leader for the Sioux tribe, providing political, military, and spiritual guidance.In the 1860s, U.S. troops attempted to push the Native Americans westward onto reservations. Sitting Bull united the Sioux tribes in a fight for their land, leading to the Great Sioux Wars. The warsled to the Battle of Little Bighorn in 1876, where Sitting Bull and the united tribes claimed victory over General George Custer. He resumed leadership of his people in South Dakota later in life.

Sitting Bull died in 1890 on Standing Rock Indian Reservation, after he was shot and killed by tribal police officers. Even today, we remember the Native American chief Sitting Bull for his bravery and leadership. At American Mint, we offer the Sitting Bull Commemorative Coin to honor one of the most famous Native Americans in history.

Presenting the Sitting Bull CommemorativeCoin The obverse of the Sitting Bull gold coin features a detailed engraved portrait of the brave leader, layered in 24k gold. In the background, we see the famous chief on horseback. The top of the coin reads, "Sitting Bull," and under the leader's name is the description "Hunkpapa Lakota Sioux." The dates of his impressive life, 1831 to 1890, are also on this face of the coin.

On the reverse are the words "Native American Chiefs." The bottom border of the coin reads, "Great Leaders of the Indian Nations." In the center of this side is a powerful Native American symbol, the Thunderbird, which represents power and strength-qualities that Sitting Bull surely possessed. Geometric decorative touches make this Sitting Bull Sioux chief coin stunningly detailed overall.

Purchase the Sitting Bull Commemorative Coin From American Mint Add this Native American chief Sitting Bull coin to your collection for a brilliant gold-layered addition. The Sitting Bull of the Sioux tribe coin is a remarkable piece for a personal set that reflects America's history and Native American history. A Sitting Bull coin would also make a unique gift for someone in your life with an interest in the early history of the nation. Whether you keep it for yourself or gift it, this coin, minted to proof-quality standards, will be brilliant on display.