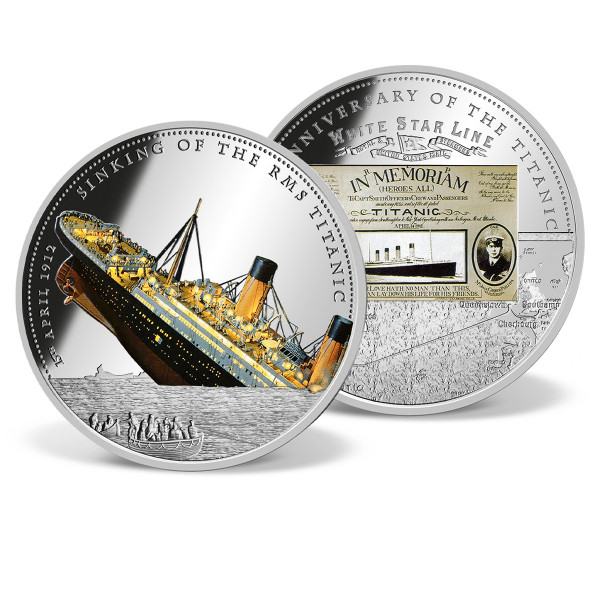 Includes a free preview of future issues in the collection A Titanic Tribute. For more information, please refer to the Satisfaction Guarantee tab below. If you do not wish to preview future issues in the collection, you may purchase the single item using the 'Individual Item Only' tab at right.
Price $129.95 * $19.95
Total: $19.95
You save $110.00
Total: $129.95
Tweet
Share
Description Satisfaction Guarantee
Description
On April 10, 1912, the RMS Titanic - the largest ship afloat - left Southampton, England, on her... more
Close menu
Sinking of Titanic Comm.Strike

On April 10, 1912, the RMS Titanic - the largest ship afloat - left Southampton, England, on her maiden voyage to New York City. White Star Line, builders of the massive ocean liner, had spared noexpense in assuring her luxury. A legend even before she sailed, her passengers were a mixture of the world's wealthiest basking in the elegance of first-class accommodations and immigrants packed into steerage.

She was touted as the safest ship ever built - so safe that she carried only 20 lifeboats, enough to accommodate fewer than half of her 2,223 passengers and crew. Considered "unsinkable," it was assumed the lifeboats would only be necessary to rescue survivors of other sinking ships. Confidently, Captain Edward Smith pushed the ship at top speed through the icy waters in an attempt to win the coveted Blue Riband, a prestigious award given to the fastest passenger liner to cross the Atlantic.

Four days into her journey, on the clear, crisp night of April 14, theRMS Titanic struck an iceberg at 11:40 P.M. Originally thought to be a minor collision with little effect on the mammoth vessel, it soon became apparent something was horribly wrong as icy water poured through the ship. An SOS was sent out to neighboring ships.

Forty miles away, the Carpathia picked up the ship's distress call and made way at full speed through the ice-filled Northern Sea. It would be too late, however. By the time the Carpathia arrived, all that remained of the Titanic was a handful of lifeboats filled with just 706 shocked survivors.

More than 100 years after the tragic voyage of the RMS Titanic, it is the memory of the more than 1,500 souls lost that has made its legend a cautionary tale about the perils of human pride and its fragility.

Beautiful Sinking of the Titanic Commemorative Coin for Sale Now you have the incredible opportunity to add a silver-plated tribute to the Titanic to your private collection with this AMERICAN MINT EXCLUSIVE masterpiece. This brilliant coin is an impressive 2.75" in diameter and has been luxuriously plated in .999 pure silver. The reverse of the coin features a sepia-tone image of the Memoriam held in honor of the captain and crew.

Limited Edition 2012 Sinking of the Titanic Coin Recognizes the 100th Anniversary We issued our 2012 Titanic coin as a fitting tribute to this century-old legend. It comes in a protective capsule to preserve its luster for future generations and includes a Certificate of Authenticity. As with every item American Mint offers, your satisfaction is 100% guaranteed. In remembrance of the year of the Titanic's fateful voyage, we've limited the minting of our Sinking of the Titanic coin to only 1,912 complete collections. Don't wait until it's too late to get yours!

Get a Great Price on the Sinking of the Titanic 100th Anniversary Coin We've made this Titanic commemorative coin available at an amazinglylow online price. You can also get free shipping if your order totals at least $150. We also offer the opportunity to pay in interest-free monthly installments if you spend more than $100.

To purchase your Sinking of the Titanic coin, add the item to your shopping cart and complete the fast, secure online checkout process. You can also call us at 1-877-807-MINT from 8 a.m. to 8 p.m. ESTMonday through Friday for friendly, personalized assistance.