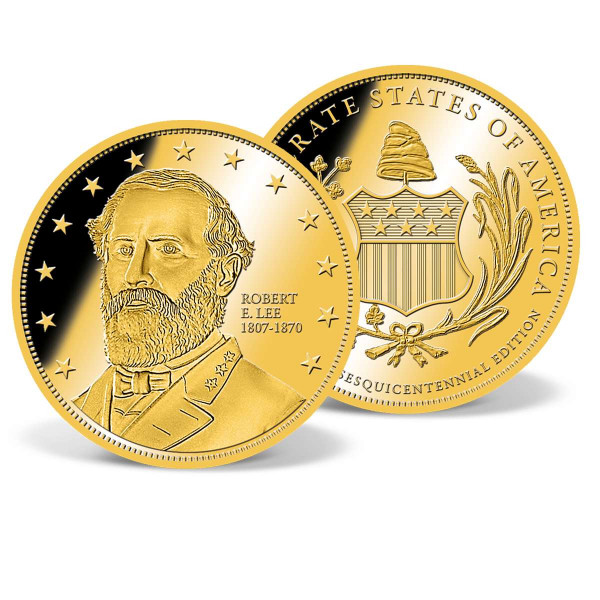 150 years ago - with our nation divided over issues of slavery, states' rights, and economic survival - the southern states seceded from the Union to form the Confederate States of America. Like somany Americans caught in the middle, Robert E. Lee, a respected Colonel in the Union Army, was forced to choose between his nation and his state. In a decision that changed American history, Lee declined command of the Union Army and sided with his home state of Virginia.

Lee soon rose to the rank of General and was given command over the Army and Navy of Virginia. Driven by duty and guided by honor, Lee soon achieved legendary status as a true hero of the Confederate South. His dazzling military maneuvers brought about many victories for the outmanned Confederate Army before succumbing to Union forces at Appomattox in 1865. Even in defeat, Lee served as a symbol of courage and dignity, embodying the finest elements of a true Southern gentleman. His brilliance on the battlefield and the determination which he instilled in his men made him one of the greatest military leaders in our nation's history.

The Robert E. Lee Coin Pays Homage to the Legendary Confederate General Now you can add a solid 14k gold coin commemorating the 150th Anniversary of the Civil War to your collection! Meticulously designed by American Mint - in conjunction with The National Civil War Museum - for the Sesquicentennial of the Civil War, this official coin is a solid 14k gold tribute to General Robert E. Lee. The obverse features a highly detailed engraving of the legendary Confederate hero. On the reverse is a Southern liberty cap above a shield with seven stars, representing the original seceding States, surrounded by stalks of sugar cane and cotton - a design reminiscent of original Confederate coins.

Our Robert E. Lee Coin Meets the Highest Quality Standards The Robert E. Lee coin is yet another example of American Mint's unwavering commitment to producing the finest commemorative coins and collectibles at affordable prices. Minted to the highest quality "Proof standard, this gold coin comes in a protective capsule to preserve itfor future generations. It also includes a Certificate of Authenticity, which validates its size and materials and includes numerous interesting historical facts about the item. Act quickly to get yours while the supply lasts.

As with every item American Mint offers, your satisfaction is 100% guaranteed. If you're dissatisfied with your coin for any reason, return it within 20 days fora replacement, store credit, or full refund.

Ordering Your Robert E. Lee Coin Is Fast and Easy To make the beautiful Robert E. Lee coin part of your collection, complete our user-friendly online ordering process by adding the item to your shopping cart and filling out the required form.