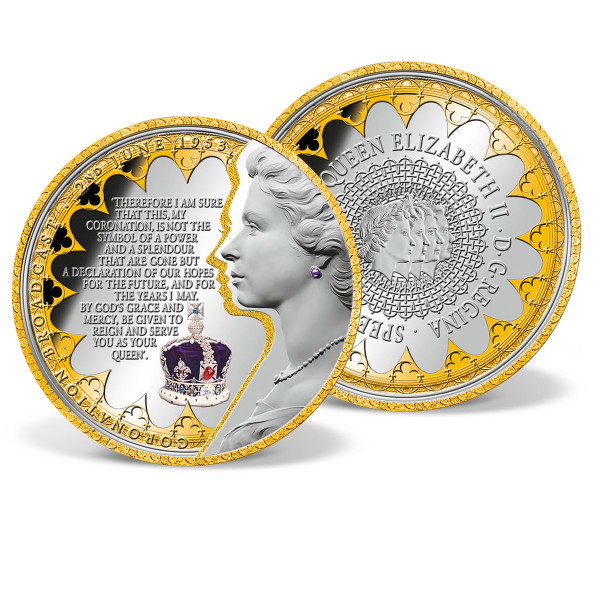 Includes a free preview of future issues in the collection The Queen's speeches. For more information, please refer to the Satisfaction Guarantee tab below. If you do not wish to preview future issues in the collection, you may purchase the single item using the 'Individual Item Only' tab at right.
Price $99.95 * $19.95
Total: $19.95
You save $80.00
Total: $99.95
Tweet
Share
Description Satisfaction Guarantee
Description
Queen Elizabeth II is the longest reigning monarch in British history - and many collectors are... more
Close menu
Queen Elizabeth's Coronation Speech Commemorative Coin

Queen Elizabeth II is the longest reigning monarch in British history - and many collectors are looking for special commemoratives to document her long and successful reign.

At Elizabeth's 'Crowning Ceremony', St. Edward's Crown was placed on The Queen's head the whole country joined in celebration. Later in the evening, following the service, Her Majesty made a broadcast to the nation reflecting on the events of the day, thanking the public for their support and promising to serve the nation.

'I am sure that this, my Coronation, is not the symbol of a power and a splendour that are gone but a declaration of our hopes for the future, and for the years I may, by God's Grace and Mercy, be given to reign and serve you as your Queen'.

And what a gloriousreign it has been! Since that day The Queen has emained true to her promise serving faithfully and unflinchingly through the good times and the bad.

This beautiful commemorative strike, masterfully finished with pure silver and gold, is an exclusive memento of Queen Elizabeth's coronation 60 years ago.