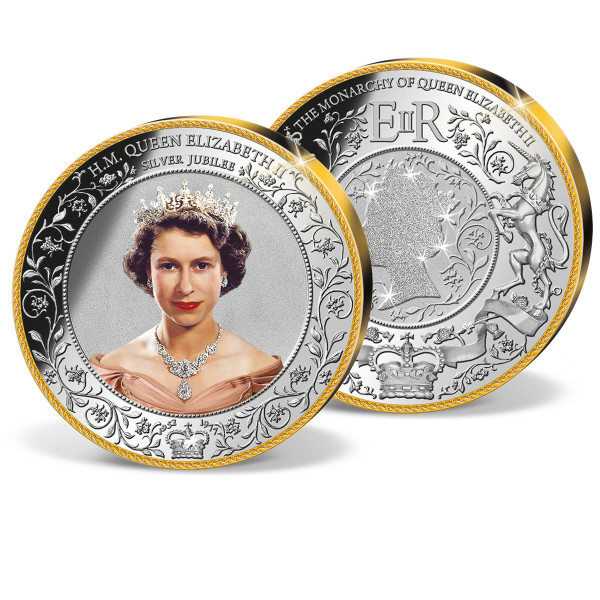 Includes a free preview of future issues in the collection Monarchy of Queen Elizabeth II. For more information, please refer to the Satisfaction Guarantee tab below. If you do not wish to preview future issues in the collection, you may purchase the single item using the 'Individual Item Only' tab at right.
Price $139.95 * $19.95
Total: $19.95
You save $120.00
Total: $139.95
Tweet
Share
Description Satisfaction Guarantee
Description
In 1977, Her Majesty celebrated her Silver Jubilee with a spectacular tour of the commonwealth,... more
Close menu
Queen Elizabeth II Silver Jubilee Colossal Commemorative Coin

In 1977, Her Majesty celebrated her Silver Jubilee with a spectacular tour of the commonwealth, travelling 56,000 miles throughout 36 countries. Today, Queen Elizabeth is the longest-reigning British monarch - surpassing her great great grandmother Queen Victoria - and the only one to achieve the Sapphire Jubilee in celebration of 65 years on the royal throne.

The Silver Jubilee saw the largest public display of affection for The Queen since her Coronation. Undertaking one of the most ambitious tours of the Commonwealth ever, The Queen travelled 56,000 miles & to 36 countries. Celebrations culminated in June on her Official Birthday. On 6 June, the Queen lit the first in a spectacular chain of beacons that linked the whole country. The following day an estimated 500 million tuned in to watch the Queen's procession down the Mall and the nation celebrated with street parties.

"The events that I have attended to mark my Diamond Jubilee have been a humbling experience. It has touched me deeply to see so many thousands of families, neighbors and friends celebrating together in such a happy atmosphere."

Queen Elizabeth II was born Princess Elizabeth Alexandra Mary on April 21, m1926, in London, England. When her father, Prince Albert, was unexpectedly made King in 1936, Elizabeth suddenly became heir to the throne of the entire British Empire. The young Elizabeth showed her regal presence comforting and reassuring all of England's children during World War II. After the death of her father in 1952, she was crowned Queen Elizabeth II, Royal Sovereign of the United Kingdom. In Westminster Abbey, where English kings and queens have been crowned for over 900 years, she stood beside her husband Prince Philip as the Archbishop of Canterbury gloriously presented "Queen Elizabeth, your undoubted Queen." In jubilation, the people responded with shouts of "God Save Queen Elizabeth." The ceremony was a spectacle unlike any the world had ever seen.