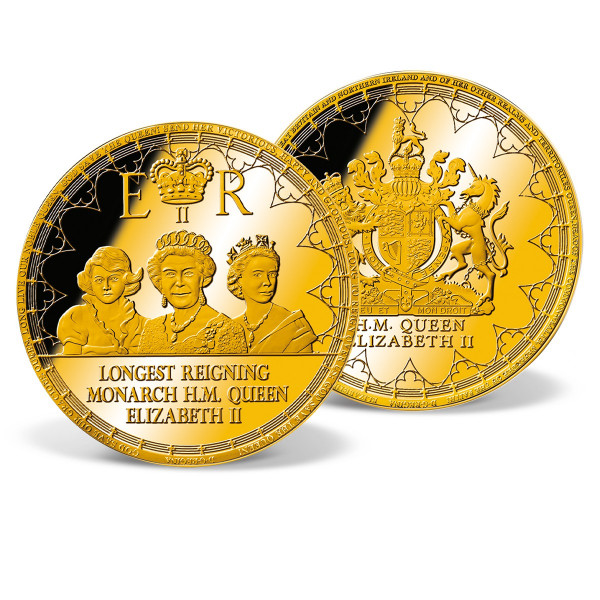 Includes a free preview of future issues in the collection Queen Elizabeth II. For more information, please refer to the Satisfaction Guarantee tab below. If you do not wish to preview future issues in the collection, you may purchase the single item using the 'Individual Item Only' tab at right.
Price $179.95 * $19.95
Total: $19.95
You save $160.00
Total: $179.95
Tweet
Share
Description Satisfaction Guarantee
Description
Queen Elizabeth II was born Princess Elizabeth Alexandra Mary on April 21, 1926, in London,... more
Close menu
Queen Elizabeth II - Longest Reigning Monarch Jumbo Commemorative Coin

Queen Elizabeth II was born Princess Elizabeth Alexandra Mary on April 21, 1926, in London, England. When her father, Prince Albert, was unexpectedly made King in 1936, Elizabeth suddenly became heir to throne of the entire British Empire. The young Elizabeth showed her regal presence comforting and reassuring all of England's children during World War II. After the death of her father in 1953,she was crowned Queen Elizabeth II, Royal Sovereign of the United Kingdom.

In 2015, England, her sovereign states, and all British citizens throughout the world celebrated Her Majesty QueenElizabeth II becoming the longest reigning monarch in Great Britain's history. Last year, Her Royal Highness reached her Sapphire Jubilee, marking her 65th Anniversary on the throne.

Available exclusively from American Mint, this official coin is an incredible work of art and features the absolute finest in coin design and minting. A breathtaking 4" in diameter, this gigantic coin is layered in brilliant 24k gold. We utilize the newest advances in the fine art of coining to create exquisitely sharp details in the sculpting and beautiful textures that stand out on the coin's mirrorlike background. Minted to the highest quality "Proof" standard, this incredible tribute features three beautifully detailed portraits of Her Majesty Queen Elizabeth II - one of a young Elizabeth beforeher coronation, one a portrait of the 27-year-old newly crowned Queen, and one from her diamond jubilee celebration. Strictly limited to only 2,016 complete collections worldwide, each coin is individually numbered on its edge and includes a numbered Certificate of Authenticity.