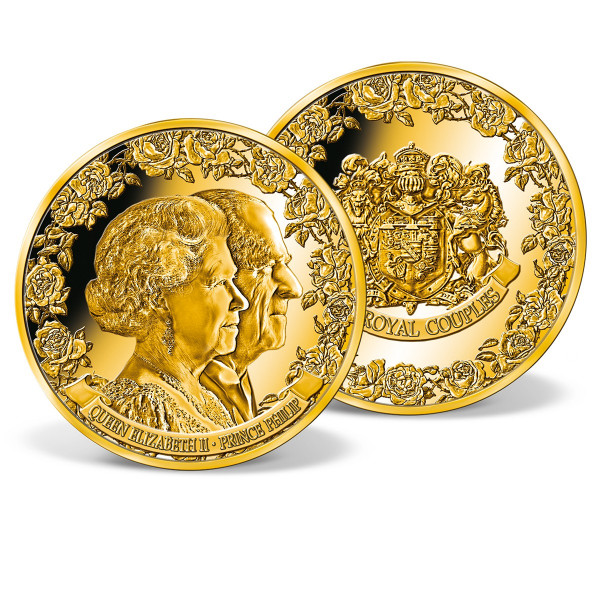 Includes a free preview of future issues in the collection Royal Couples. For more information, please refer to the Satisfaction Guarantee tab below. If you do not wish to preview future issues in the collection, you may purchase the single item using the 'Individual Item Only' tab at right.
Price $79.95 * $19.95
Total: $19.95
You save $60.00
Total: $79.95
Tweet
Share
Description Satisfaction Guarantee
Description
"He has, quite simply, been my strength and stay all these years, and I, and his whole family,... more
Close menu
Queen Elizabeth II and Prince Philip Commemorative Coin

"He has, quite simply, been my strength and stay all these years, and I, and his whole family, and this and many other countries, owe him a debt greater than he would ever claim, or we shall ever know."
Queen Elizabeth II

She was a young princess of the British Royal Family, determined to marry for love, and he was a naval cadet with "movie-idol" looks and a Royal pedigreeof his own. Together, Queen Elizabeth II and Prince Philip, the Duke of Edinburgh, have shared an unbreakable love and a strong marriage that has now spanned over 70 years.

They met in 1939when 18-year-old Philip Mountbatten, a descendant of Danish and Greek royalty, was Princess Elizabeth's escort on the Royal Family's tour of the Naval War College. The 13-year-old Elizabeth developeda crush on Philip during the trip and the two started to exchange letters. They continued to correspond as Philip served in the British Navy during World War II. The courtship continued for the next 15 years.

After the war, Philip surrendered his Greek and Danish Royal titles and became a British citizen, setting the stage for a Royal wedding for the ages. On November 20, 1947, PrincessElizabeth married Philip, who was given the title of Duke of Edinburgh. The wedding brought a new era of hope to all of England, which was still reeling from the devastation of World War II.

The couple had their first child, Charles Philip Arthur George, in 1948. Eventually they would have three more children: Anne, Andrew, and Edward.

After the death of King George in 1952, Elizabeth became the Queen. In 1953, at her official coronation, Queen Elizabeth II stood with Philip by her side (it was not until 1957 that Philip officially received the title of Prince) - and he hasbeen there beside her ever since.

In 2015, Queen Elizabeth II became the longest-reigning monarch in the history of Great Britain.

In recent years, Prince Philip's health had declined to the point that he has announced his retirement from public duties, but their love story continues. In 2017, the then-91-year-old Elizabeth and her 96-year-old husband celebrated their 70th Anniversary with a private party held at Windsor Castle.

Specially minted by the prestigious British firm Windsor Mint to mark Elizabeth and Philip's 70th Anniversary, this 24k gold-layered coin is available in the U.S. exclusively from American Mint. Minted to the highest quality "Proof" standard, it features a magnificent portrait of the Royal Couple on the obverse. The reverse features the official Coat of Arms for the Royal Windsor Family.