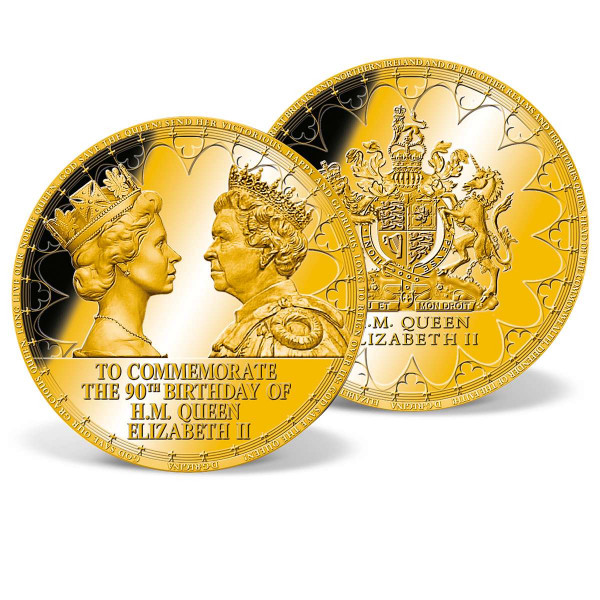 Includes a free preview of future issues in the collection Queen Elizabeth II. For more information, please refer to the Satisfaction Guarantee tab below. If you do not wish to preview future issues in the collection, you may purchase the single item using the 'Individual Item Only' tab at right.
Price $179.95 * $19.95
Total: $19.95
You save $160.00
Total: $179.95
Tweet
Share
Description Satisfaction Guarantee
Description
American Mint proudly presents a very limited release of this official 24k gold-layered coin... more
Close menu
Queen Elizabeth II - 90th Birthday Commemorative Coin

American Mint proudly presents a very limited release of this official 24k gold-layered coin specially minted to celebrate Queen Elizabeth II's 90th birthday. A gigantic 4" in diameter, it is a jumbo example of the absolute finest in coin design and minting. Utilizing the latest advances in the fine art of coining, this magnificent coin is minted to the highest quality "Proof standard with twoincredibly detailed portraits of Her Majesty Queen Elizabeth II - one portrait of the 27 year-old newly crowned Queen from 1953 and a recent portrait from her diamond jubilee celebration. Our royal tribute begins the Queen Elizabeth II jumbo coin collection which is strictly limited to only 2,016 complete collections worldwide.

April 21, 2016 marked the historic 90th birthday of Her Majesty Queen Elizabeth II. To mark this momentous occasion, royal gun salutes were fired in the United Kingdom's capital cities, and Her Majesty dedicated "The Queen's Walkway", a 3.78 mile sightseeingtrail linking more than 60 siginficant locations throughout the town of Windsor. In the evening, the Queen lit the first of more than 900 glowing beacons around the UK and worldwide to honor England's longest serving monarch.