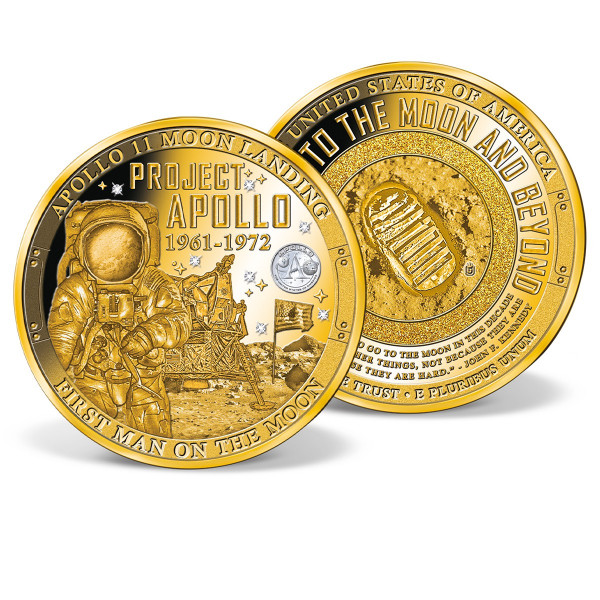 Includes a free preview of future issues in the collection Journey to the Moon and Beyond. For more information, please refer to the Satisfaction Guarantee tab below. If you do not wish to preview future issues in the collection, you may purchase the single item using the 'Individual Item Only' tab at right.
Price $139.95 * $19.95
Total: $19.95
You save $120.00
Total: $139.95
Tweet
Share
Description Satisfaction Guarantee
Description
"That's one small step for man, one giant leap for mankind." Neil Armstrong - July 20, 1969... more
Close menu
Project Apollo Colossal Commemorative Coin

Available exclusively from American Mint, this colossal coin was specially designed and minted to commemorate the 50th Anniversary ofthe Apollo 11 moon landing. An incredible 2.75" in diameter, it is minted to the highest quality "Proof" standard and layered in brilliant 24k gold. The obverse features a beautifully sculpted imageof Neil Armstong and the Apollo 11 Lunar Module on the moon. Accenting the obverse are 7 sparkling Swarovski® crystal inlays and a silver-plated privy mark inspired by the original Apollo Program patch. The reverse shows Armstong's lunar footprint framed within a circle that is finished with a sparkling diamond-dust effect.