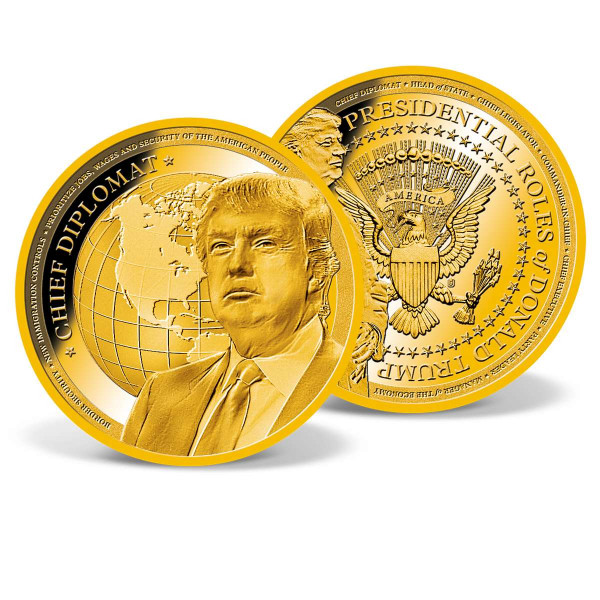 Includes a free preview of future issues in the collection Presidential Roles of D. Trump. For more information, please refer to the Satisfaction Guarantee tab below. If you do not wish to preview future issues in the collection, you may purchase the single item using the 'Individual Item Only' tab at right.
Price $89.95 * $9.95
Total: $9.95
You save $80.00
Total: $89.95
Save $80.00 with our Satisfaction Guarantee
Tweet
Share
Description Satisfaction Guarantee
Description
"From this day forward, a new vision will govern our land. From this moment on it's going to be... more
Close menu
President Trump - Chief Diplomat Commemorative Coin

"From this day forward, a new vision will govern our land. From this moment on it's going to be America First."
Donald Trump

When Donald J. Trump won the Presidential election it was considered one of the greatest upsets in the history of American politics, but it wasn't a surprise to the millions of frustrated Americans who voted for the charismatic billionaire. Since his first day in office, he has shaken off the naysayers and taken the bold steps needed to improve the economy, secure our borders, and bring jobs back to America - just as he had promised during his historic campaign. He stands firmly in his belief that the U.S. is the greatest nation in the world and that when its people work toward a common goal, they will "Make America Great Again," restoring itsstanding as a beacon of freedom, strength, and prosperity.

In becoming President of the United States, Donald Trump took on several important roles: Chief Diplomat, Head of State, Chief Legislator, Commanderin- Chief, Chief Executive, Party Leader, and Manager of the Economy. The one thing all of these roles have in common - and the President's most important responsibility - is assuringthe security and well-being of the American people. Whether it's through immigration reform and border security or by prioritizing American jobs, President Trump's role as Chief Diplomat is to put America First.

American Mint proudly presents this specially minted coin commemorating President Trump's role as our nation's Chief Diplomat. Minted to the highest quality "Proof" standard andluxuriously layered in 24k gold, it features a highly detailed engraving of President Trump with the globe in the background on the obverse. The reverse is a tribute to all of the important Presidential roles of Donald Trump.