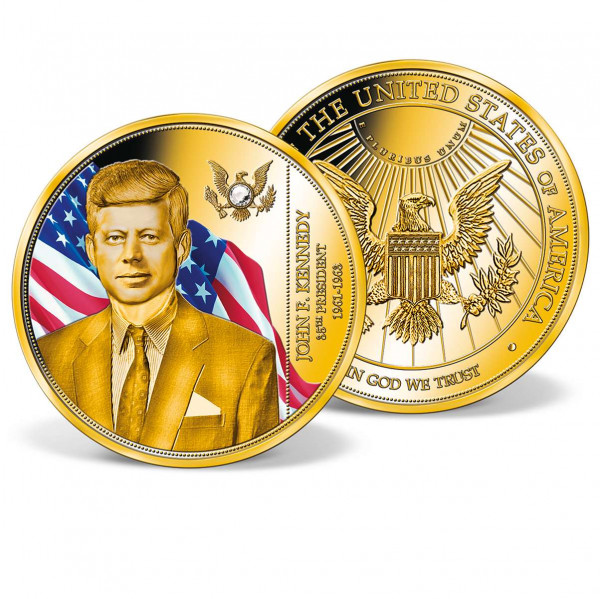 When John F. Kennedy was elected President in 1961, he was the youngest person to be elected to our nation's highest office. To many Americans, his election symbolized the rise of a more youthful idealism. As President, JFK led the nation through the Cuban Missile Crisis, made the world a better place by creating the Peace Corps, paved the way to equality by initiating the Civil Rights Act, andopened up space by making it man's mission to travel to the moon.

His brilliant political career - and all the promise it held - was cut short by an assassin's bullet on Friday, November 22, 1963, in Dallas, Texas. It is difficult for anyone who was not a witness to those sad days to fully comprehend the sense of loss that overtook the nation. Today, JFK remains one of the most belovedand revered men ever to hold the Office of President of the United States of America.

American Mint proudly presents the official release of our limited-edition coin specially minted to commemorate one of the greatest Presidents of our time. This breathtaking work of art is minted to the highest quality "Proof" standard and layered in 24k gold. The obverse is highlighted by the exquisitely detailed portrait of JFK with the American flag accented in full color in the background. Also featured on the obverse is the heraldic eagle from the Presidential Seal which is brilliantly inlaid with a sparkling Swarovski® crystal. Available exclusively from American Mint, this coin comes in its own protective capsule to preserve it for future generations.