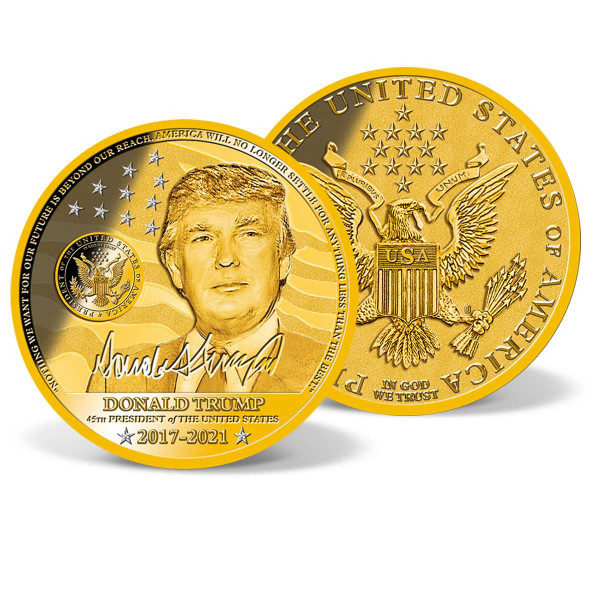 Includes a free preview of future issues in the collection U.S. Presidents Crystal Inlay. For more information, please refer to the Satisfaction Guarantee tab below. If you do not wish to preview future issues in the collection, you may purchase the single item using the 'Individual Item Only' tab at right.
Price $199.95 * $19.95
Total: $19.95
You save $180.00
Total: $199.95
Tweet
Share
Description Satisfaction Guarantee
Description
Since his very first day as President, Donald Trump has taken the bold actions needed to "Make... more
Close menu
President Donald Trump Crystal-Inlaid Commemorative Coin

Since his very first day as President, Donald Trump has taken the bold actions needed to "Make America Great Again" - just as he promised during his historic campaign. He stood firmly in his beliefthat the U.S. is the greatest nation in the world and that when its people work toward a common goal, we can restore America's standing as a beacon of freedom, strength, and prosperity. From a booming economy to decisive actions to protect our nation against foreign forces who seek to do us harm, President Trump proved time after time that his commitment to putting America first was exactly whatour nation needed.

For the 2020 campaign, Trump looked to build on the many successes of his first term and reinvigorate his supporters with a brand new slogan, "Keep America Great!" The election proved to be a monumental event for the public, prompting the biggest voter turn out in our nation's history, and President Trump received even more votes than his victory in 2016. Win or lose,Donald Trump has done so much for the American people and left a lasting impression on politics around the world. Thank you for your service, Mr. President!

Available exclusively from American Mint, this official commemorative coin is a massive 4" in diameter and layered in 24k gold. Minted to the highest quality "Proof" standard, it features the portrait of President Trump and the Presidential Seal on the obverse. Behind the President is the American Flag in a glorious matte finish accented by 10 brilliant Swarovski® crystal stars with 2 more crystals highlighting the dates of President Trump's term in office. This limited-edition tribute is a magnificent example of the finest in coin design and minting.