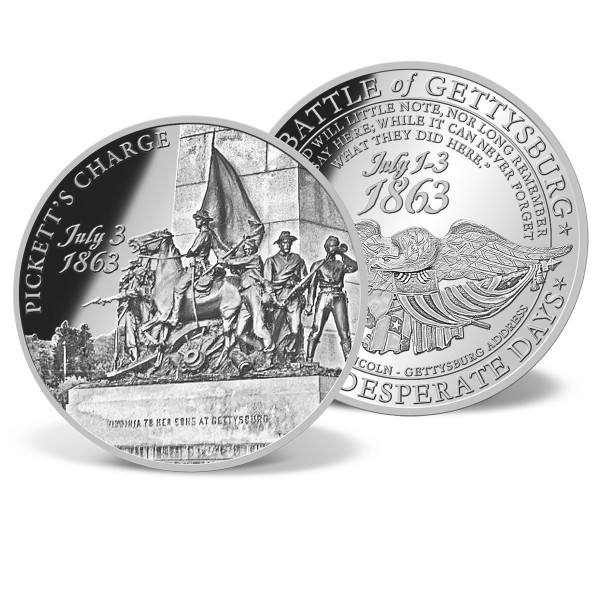 Includes a free preview of future issues in the collection Gettysburg - 3 Desperate Days. For more information, please refer to the Satisfaction Guarantee tab below. If you do not wish to preview future issues in the collection, you may purchase the single item using the 'Individual Item Only' tab at right.
Price $79.95 * $19.95
Total: $19.95
You save $60.00
Total: $79.95
Tweet
Share
Description Satisfaction Guarantee
Description
On July 1, 1863, with the nation entering its second year of civil war, Union and Confederate... more
Close menu
Pickett's Charge Commemorative Coin

On July 1, 1863, with the nation entering its second year of civil war, Union and Confederate forces clashed in the small Pennsylvania farm town of Gettysburg. For 3 days, the bloodiest battle everfought on American soil raged throughout the town. For the first 2 days, Confederate forces hammered the flanks of the Union line but could not break through. In the early afternoon of what would bethe final day, General Lee decided to attack the Union center, stationed on Cemetery Ridge. The assault was led by Major General George Pickett and became the turning point of the battle. It became known as Pickett's Charge as 15,000 Confederate soldiers advanced across a mile-wide field straight into the cannon and rifle fire of 6,500 wellensconced Union forces. The ill-fated assault resulted inover 6,000 Confederate casualties and marked the end of the Battle of Gettysburg as well as Lee's last invasion of the North.

Everything changed after Gettysburg. The severely weakened Confederacy was not able to mount another major offensive and surrendered at Appomattox in 1865, ending the darkest period in American history.

Meticulously designed by American Mint - in conjunction with The National Civil War Museum - for the Sesquicentennial of the Civil War, this exquisite coin commemorates the turning point in the Battle of Gettysburg. Minted to the highest quality 'Proof' standard and plated in .999 pure silver, it features a highly detailed engraving of the Virginia Monument located at the site of Pickett's Charge on the Gettysburg Battlefield.