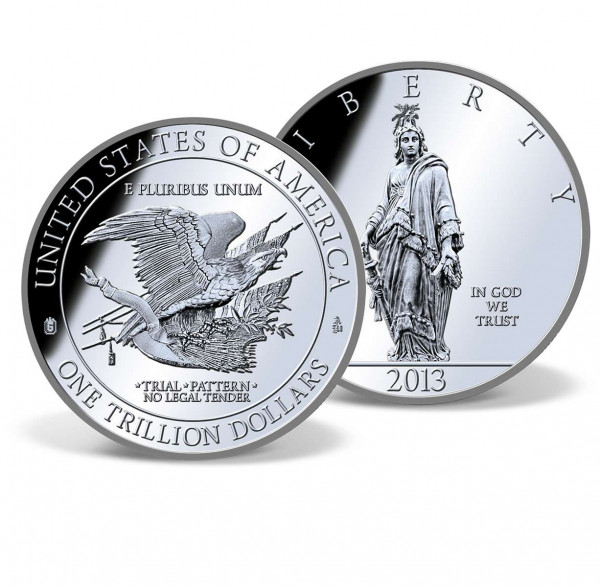 Includes a free preview of future issues in the collection Platinum-Layered U.S. Replicas. For more information, please refer to the Satisfaction Guarantee tab below. If you do not wish to preview future issues in the collection, you may purchase the single item using the 'Individual Item Only' tab at right.
Price $79.95 * $9.95
Total: $9.95
You save $70.00
Total: $79.95
Tweet
Share
Description Satisfaction Guarantee
Description
Is it possible that a single coin could be the solution to America's debt crisis?... more
Close menu
One Trillion-Dollar Trial Coin

Is it possible that a single coin could be the solution to America's debt crisis?

Following the Great Recession of 2008, the economy was in dire straits. Housing foreclosures had reachedrecord levels, and for the first time in history, the United States credit rating dropped from AAA, the highest attainable, to AA+. The national debt was becoming a real crisis, and economists were looking for creative solutions to help stop the economy's decline.

In 2011, the government introduced the concept of minting a one trillion dollar platinum coin to increase the country's borrowing limit. This would be legal because while there are restrictions in place to prevent the U.S. Mint from printing unlimited paper currency, there are none to prevent them from striking coins in any quantity and value.

With the special authorization to mint a one trillion dollar platinum coin, the U.S. Treasury would have the power to create one-trillion dollars of tradeable currencywithout needing paper currency to back the value. Had this coin been approved, it would have been the largest denomination of currency of any type ever issued by any government, ever before in history.

The idea gained traction. During 2012, the trillion-dollar platinum coin became a mainstream talking point when commentators discussed solutions for ending the debt crisis. However, just as the country started to become familiar with the concept, the Federal Reserve and U.S. Treasury Department decided not to proceed with production.

The American Mint One Trillion Dollar Platinum Coin At American Mint, we are pleased to bring you the One Trillion-Dollar Trial Coin. This coin is an American Mint exclusive, and production is strictly limited to just 9,999 complete collections across the world. This magnificent trial coin is our artist's interpretation of what the one trillion dollar platinum coin would look like, had Congress given approval for the TreasuryDepartment to mint this historic piece of currency.

Our one trillion dollar platinum coin is minted to the highest quality "Proof" standard. With a core made of pure copper, this impressivepiece of craftsmanship is layered in luxurious 0.9995 pure fine platinum. The coin is stamped for the year 2013 as a symbolic reference to the year it almost came to be and was ultimately put on indefinite hold. Measuring 40mm diameter and weighing 32 g, the One Trillion-Dollar Trial Coin is a sure conversation starter and statement piece that is perfect for any collection.

Buy the One Trillion-Dollar Trial Coin as a Gift or Add One to Your Collection A one trillion dollar platinum coin might be something this country never sees again. Make sure you have yours, so you can share the story of the coin that almost was with future generations. To order your One Trillion-Dollar Trial Coin, make a one-time purchase today online, or sign up to receive other coins in our collection of platinum-layered U.S. replicas and take advantage of significant savings on your order.