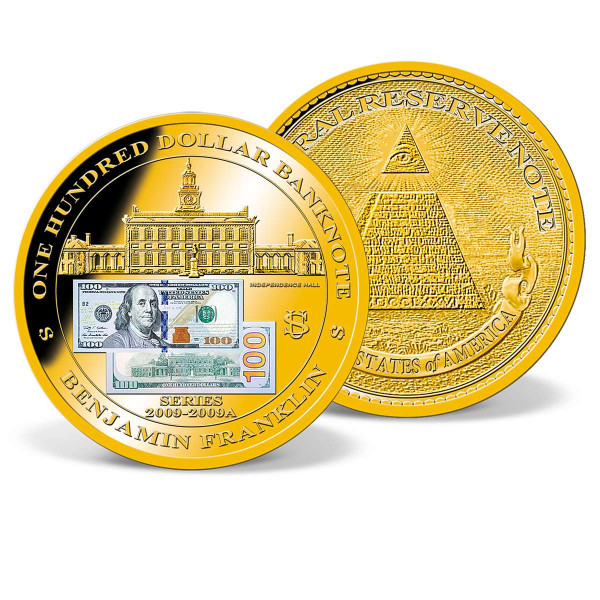 Includes a free preview of future issues in the collection Federal Reserve Notes USA +. For more information, please refer to the Satisfaction Guarantee tab below. If you do not wish to preview future issues in the collection, you may purchase the single item using the 'Individual Item Only' tab at right.
Price $89.95 * $19.95
Total: $19.95
You save $70.00
Total: $89.95
Tweet
Share
Description Satisfaction Guarantee
Description
One of the Founding Fathers that shaped the United States, Benjamin Franklin was also an author,... more
Close menu
One-Hundred-Dollar Banknote Commemorative Coin

One of the Founding Fathers that shaped the United States, Benjamin Franklin was also an author, a scientist, a diplomat, and a prolific inventor who developed several life-changing inventions. Inaddition to helping draft the Declaration of Independence and the U.S. Constitution, Franklin served as the first Postmaster General, Minister to Sweden and France, and the 6th President of Pennsylvania. Today, you'll find his image on the $100 U.S. Banknote.

First introduced in 1862, the $100 bill originally featured a vignette of an American Eagle on the obverse. In 1914, Congress decided to honor Benjamin Franklin by putting his portrait on the banknote. The largest denomination banknote still in circulation, the $100 bill has been changed over the years but continues to honor this legendary Founding Father.

To stay ahead of counterfeiters, a new design for the $100 banknote was unveiled by the U.S. Department of Treasury on April 21, 2010, and featured a noticeablylarger portrait of Franklin and several colorful deterrents including a blue 3-D security ribbon with images of bells and 100s, and a color-changing bell in an inkwell. However, some of the high-techfeatures presented significant production problems which forced the Treasury to delay their release for more than three years, and the new bills finally made their official debut on October 8, 2013.

We're Proud to Offer the Ben Franklin 100 Dollar Banknote Coin American Mint honors the legacy of this true American patriot with our gleaming Benjamin Franklin 100 dollar banknote coin. Luxuriously layered in 24k gold and minted to the highest quality "Proof" standard, this dazzling commemorative coin features a full-color reproduction of the newly released $100 bill. Framing the photo-realistic inset is a highly detailed engraving of Independence Hall just as it appears on the reverse of the original banknote. The back of the coin features the inscription "Federal Reserve Note" and depicts the "Eye of Providence" symbol.

A Unique 100 Dollar Banknote Coin at a Great Price You can purchase our one hundred dollar banknote gold coin at a significantly discounted online price. You'll also get free shipping and handling if your order totals at least $150  why not add several items to your collection? What's more, you can make interest-free payment installments if you spend more than $100.

Take a look at our entire inventory of commemorative coins and other fine collectibles.