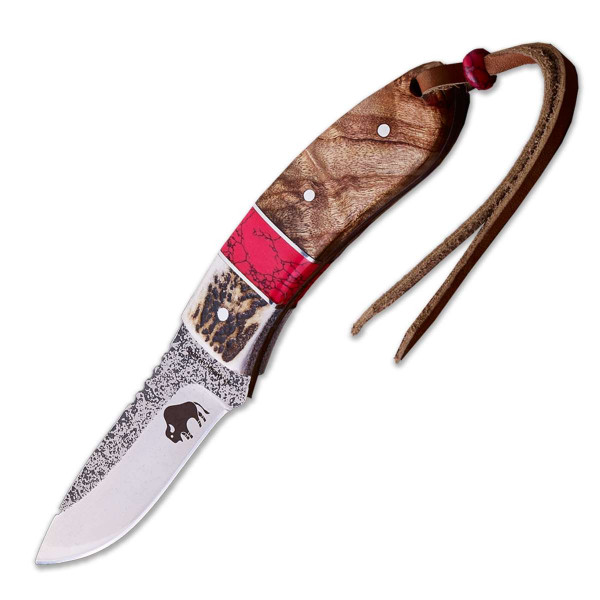 Total: $99.95
Tweet
Share
Description
Description
Buffalo played a vital role in Native American life, particularly the tribes on the Great Plains,... more
Close menu
Native American Buffalo Dagger
Buffalo played a vital role in Native American life, particularly the tribes on the Great Plains, where countless millions of buffalo roamed free in thundering herds that reached as far as the eye could see. Buffalo was not just their most important food source, but massive creatures also provided clothing, shelter, and even fuel for fires. That is why Native American folklore featured more rituals, dances, and prayers celebrating buffalo than any other animal or spirit. For centuries the buffalo held a special position of honor and were worshipped by every Plains tribe. Then came the settlers and life on the Prairie changed. The buffalo were slaughtered in massive numbers for both sport and as a way of controlling the native tribes and forcing them into relocating onto reservations. Ina span of just 30 years, the American buffalo population plummeted from a high of more than 50 million to a few tiny herds. Not only were these magnificent creatures nearly exterminated, but an but an entire lifestyle and buffalo-based culture that had existed for thousands of years was nearly destroyed. At the turn of the 19th century, strict conservation efforts were put in place to save theAmerican buffalo. Today, they have made an incredible comeback and once again roam the plains in protected parklands and private ranches throughout North America. Crafted in 420 stainless steel, this exclusive 8 3/8"-long dagger is a glorious celebration of the buffalo and its importance in Native American culture. A stylized image of a buffalo appears on the blade that has a unique stamped-in, or "incused, texture to simulate the slightly pitted look of a centuries-old knife. With a mix of traditional and modern materials, the handle features genuine stag horn, richly colored resin withthe look and feel of ruby-red turquoise, and handsome burl wood. A strip of rawhide leather bound by a resin bead adds the perfect finishing touch. This limited edition knife comes in a custom collector's box and includes a Certificate of Authenticity, assuring quality and value for generations to come.