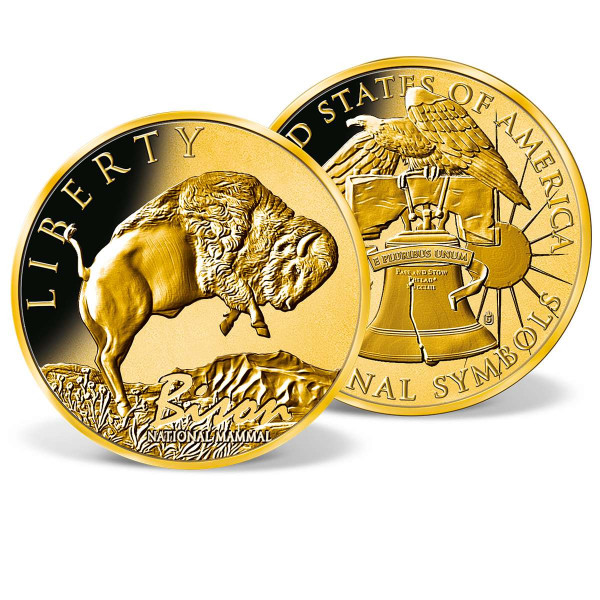 Includes a free preview of future issues in the collection USA National Symbols. For more information, please refer to the Satisfaction Guarantee tab below. If you do not wish to preview future issues in the collection, you may purchase the single item using the 'Individual Item Only' tab at right.
Price $99.95 * $29.95
Total: $29.95
You save $70.00

". . . its toughness and hardy endurance fitted it to contend purely natural forces . . . to resist cold and wintery blasts or the heat of the thirsty summer, to plunge over the broken ground, and to plow its way through snow drifts or quagmires."
Teddy Roosevelt

On May 9, 2016, the American Bison was made the first National Mammal of the United States. Bison were once kings ofthe Plains with as many as 30 million of these majestic beasts roaming North America. But, as settlers increasingly migrated West, Bison were hunted to near extinction. At the turn of the 19th century, strict conservation efforts were put in place to save them from oblivion. Today, Bison herds have made an incredible comeback and once again roam the Plains in protected parklands and private ranches throughout North America. The American Bison is a perfect symbol of the U.S. as it represents our nation's strength, history, and native culture.

Specially minted to celebrate America's first National Mammal, our official Bison - National Mammal commemorative gold coin is minted in solid 14k gold. Minted to the highest quality "Proof" standard, it features a highly detailed image of an American Bison that appears to "leap" off the coin's mirror-like finish. Available exclusively from American Mint, it comes in a protective shell to preserve it for future generations.