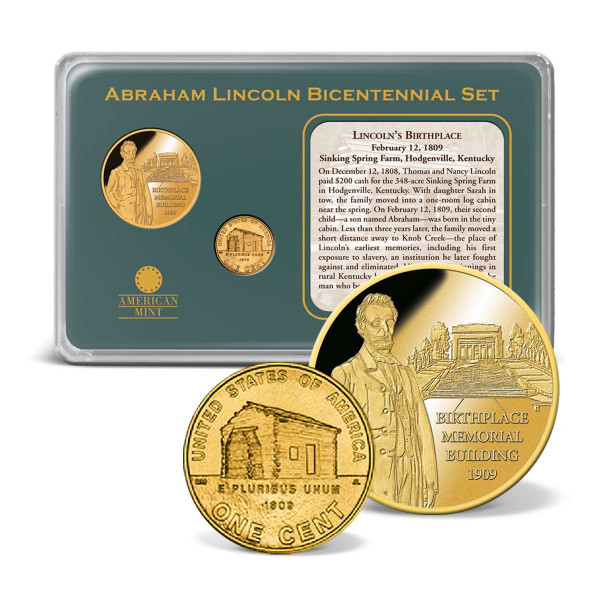 Includes a free preview of future issues in the collection Lincoln Bicentennial Coin Sets. For more information, please refer to the Satisfaction Guarantee tab below. If you do not wish to preview future issues in the collection, you may purchase the single item using the 'Individual Item Only' tab at right.
Total: $79.95
Total: $79.95
Tweet
Share
Description Satisfaction Guarantee
Description
From the most humble of beginnings in a log cabin on the Kentucky frontier, Abraham Lincoln grew... more
Close menu
Lincoln Birthplace Memorial Coin Set
From the most humble of beginnings in a log cabin on the Kentucky frontier, Abraham Lincoln grew up to become one of the greatest presidents in American history. His family lived on 30 acres on Knob Creek Farm from the time he was 2/12 until he was 8 years old. Their one-room log cabin was near the Bardstown and Green River Turnpike. It was common for people traveling along the turnpike to spend the night at the Lincolns' home, and young Abraham would probably listen to their stories of the world beyond Knob Creek. In celebration of the 200th anniversary of his birth, the U.S. Mint commissioned an historic new series of the classic Lincoln penny. For the first time in 50 years, the reverse of the penny has been changed. The new series features periods of Lincoln's life, with the first showing the log cabin of his youth and the year of his birth in 1809. Minted in 2009 only, production of this celebratory series has ceased and - after June 15, 2010 - will no longer be added into circulation. By law, these pennies will never be produced again! Genuine 2009 Lincoln "Log Cabin Penny "Brilliant Uncirculated condition Luxuriously layered in 24k gold First new penny design in 50 years First design in a limited-time penny series by the U.S. Mint 19 mm in diameter (.75") Lincoln's Birthplace Commemorative Coin Highest minting quality "Proof Luxuriously layered in 24k gold Features a detailed engraving of President Lincoln and the memorial that marks his birthplace 40 mm in diameter (1.6")