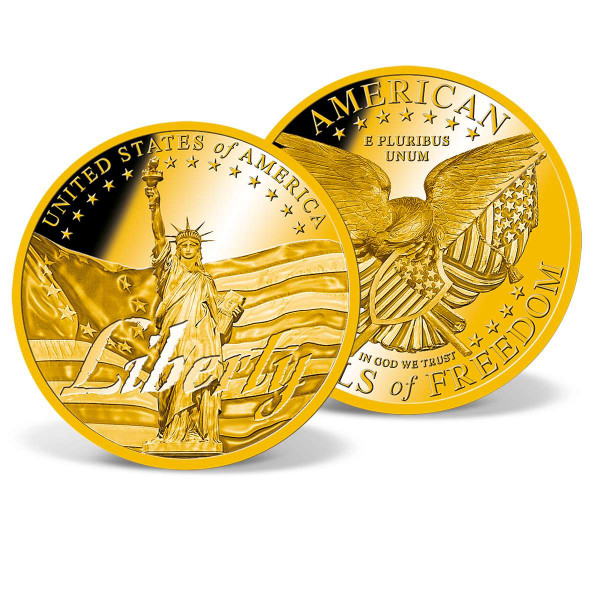 The Statue of Liberty stands on Liberty Island, acting as a beacon of freedom for visitors and immigrants to the United States. For over a century, Lady Liberty has been an iconic symbol of America. She watches over our waters with her torch raised, signaling the opportunity to pursue happiness in a land of liberty. Ever since the people of France gifted her to America, the Statue of Liberty has become synonymous with this country and freedom.

Among our other symbols of freedom are the soaring bald eagle and the Stars and Stripes. Combined, the images symbolize strength and liberty. What better way to commemorate these American images than by adding an American symbols of freedom coin to your collection?

Presenting the Liberty - Symbols of Freedom Gold Coin Add a display of patriotism to your coin collection with the symbols of freedom gold coin, layered in stunning 24k gold. Both sides of this America's symbol of freedom coin have a mirror-like shine, to reflect light and let the symbols on either side stand out. It's a brilliant addition to any collection and with its two sides featuring proud signs of American liberty, this freedom commemorative coin is meaningful no matter how you look at it.

The coin's obverse features the Statue of Liberty, our symbol of freedom. She stands in her full image with her torch and tablet before a13-star American flag, representing the 13 original colonies who fought for their freedom in the American Revolutionary War. Before the iconic American monument is the word "Liberty," reflecting whatthe symbol means for the nation. On the reverse, an eagle spreads its wings, flanked by the Stars and Stripes. This face of the coin reads, "American Symbols of Freedom" around the border to commemorate it with other symbols of American freedom coins.

Purchase Your American Mint Symbol of Freedom Gold Coin Today This symbols of freedom coin is an American Mint exclusive. Minted in the highest quality, proof standard, this gold-layered coin would be a wonderful part of your collection. You could also gift it to a fellow collector or brave veteran to honor their fight toprotect our nation's freedom. Order your American Mint symbols of freedom coin, and browse our other patriotic commemorative coins for your collection.