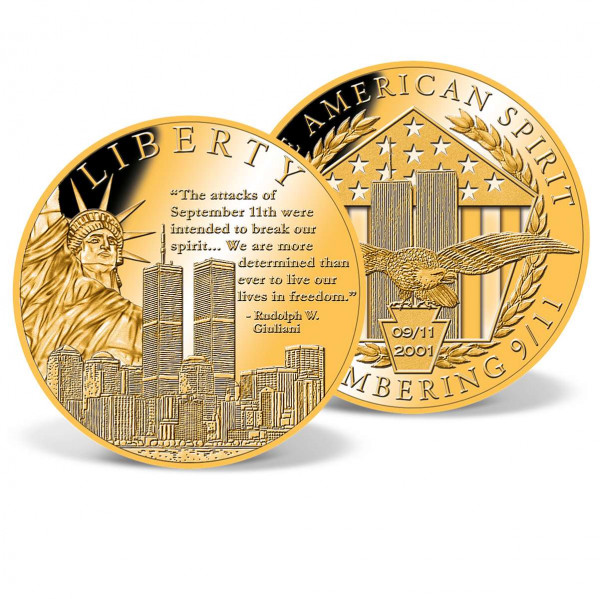 Includes a free preview of future issues in the collection The American Spirit 9-11. For more information, please refer to the Satisfaction Guarantee tab below. If you do not wish to preview future issues in the collection, you may purchase the single item using the 'Individual Item Only' tab at right.
Price $79.95 * $9.95
Total: $9.95
You save $70.00
Total: $79.95
Save $70.00 with our Satisfaction Guarantee
Tweet
Share
Description Satisfaction Guarantee
Description
Please join us in remembering September 11, 2001: The day the world changed.   On... more
Close menu
Liberty Remembering 9/11 Commemorative Coin

Please join us in remembering September 11, 2001: The day the world changed.

On September 11, 2001, at 8:45 a.m., a single airliner struck the north tower of the World Trade Center in New York. Fifteen minutes later, a second plane crashed into the south tower and exploded. So began the darkest day in American history. In an unimaginable series of coordinated terrorist attacks, hijackers intentionally crashed passenger planes into this symbol of American wealth and power, toppling the 110-story twin towers. Nearly 3,000 people lost their lives, including more than 400 firefighters and police who were attempting to rescue helpless civilians as the buildings collapsed. It was the deadliest terrorist attack on American soil./

To honor the heroism and the selfless sacrifice shown by the American people, along with the unshakable spirit of our nation, we have designed a collection that includes each of the sites impacted by the attacks.  Unique to this collection, each coin will have a fragment of mother of pearl on both the obverse and reverse.  The mother of pearl is a hard, shining iridescent substance found within the inner layer of shells that are inhabited by particular types of mollusks, such as oyster.  The mixture of colors that can include deep cobalt blue and peacock green and range through other hues of purple, pink, and cream.