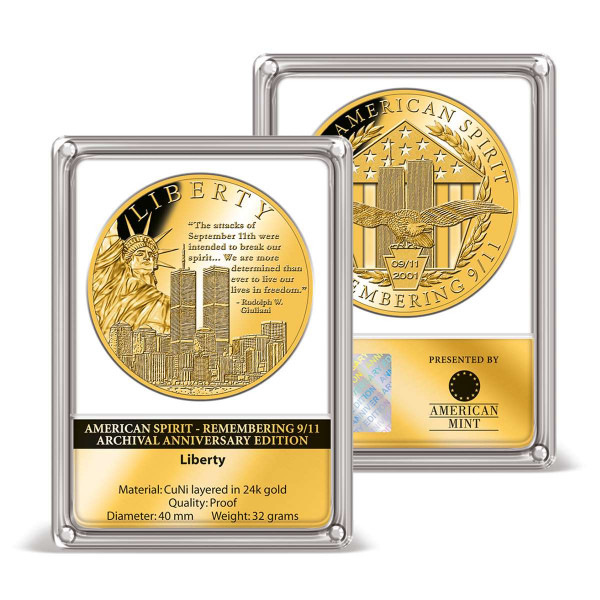 On September 11, 2001, at 8:45 a.m., a single airliner struck the north tower of the World Trade Center in New York. Fifteen minutes later, a second plane crashed into the south tower and exploded.

So began the darkest day in American history. In an unimaginable series of coordinated terrorist attacks, hijackers intentionally crashed passenger planes into this symbol of American wealth and power, toppling the 110-story twin towers. Nearly 3,000 people lost their lives, including more than 400 firefighters and police who were attempting to rescue helpless civilians as the buildingscollapsed. As the entire world sat glued to their TVs, horrified by the senseless attacks, a third passenger plane crashed into the Pentagon, causing a portion of our nation's military headquarters to collapse. Then, shortly after 10 a.m., a fourth passenger jet crashed in Shanksville, PA. It was later learned that the plane was destined for either the White House or the Capitol Building, but thepassengers had overpowered the hijackers and caused it to crash in an open field. In total, it was the deadliest terrorist attack on American soil.

"The attacks of September 11th were intended to break our spirit. Instead we have emerged stronger and more unified. We feel renewed devotion to the principles of political, economic and religious freedom, the rule of law and respect forhuman life. We are more determined than ever to live our lives in freedom." Rudolph W. Giuliani, Mayor of New York City December 31, 2001

Specially minted to commemorate the 15thAnniversary of the attacks of 9/11, this 24k goldlayered coin features the patriotic image of the Statue of Liberty overlooking the pre-attack New York City skyline with an inspirational quote from then-Mayor Rudolph Giuliani on the obverse. Minted to the highest quality "Proof" standard, it comes in our NumiShield Archival Case which is hallmarked with a special anniversary edition hologram.