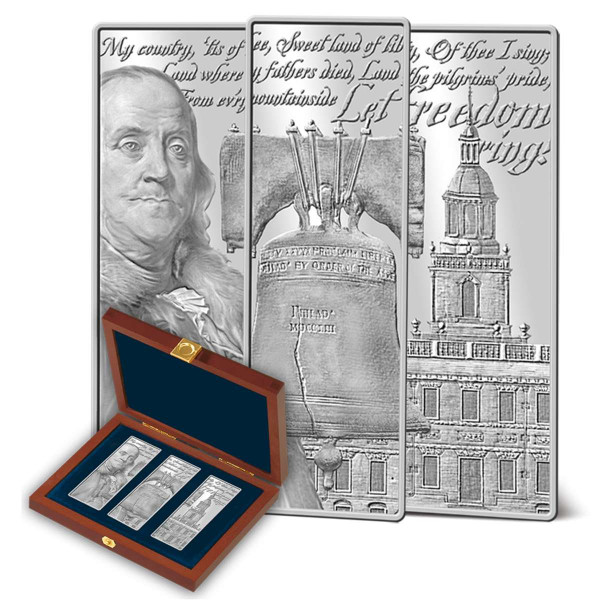 My country, 'tis of thee, Sweet land of liberty, Of thee I sing;Land where my fathers died, Land of the pilgrims' pride,From every mountainside, Let freedom ring! America by Samuel Francis Smith

When Smith wrote his ode to this great nation in 1832, he envisioned the song becoming the national anthem. It may not have been named the official national anthem, but the classic hymn invoked national pride as it portrayed the young nation's history and encouraged patriotism in all Americans. With his simple words, Smith was able to effectively and succinctlyexpress the very principles on which our nation was founded. These same ideals were put forth by the Founding Fathers -- great men like Benjamin Franklin -- in the Declaration of Independence in 1776.

Minted to the highest quality "Proof" standard in .999 pure silver, each ingot is exquisitely engraved with patriotic images that, together, form a visually striking triptych featuring Benjamin Franklin, the Liberty Bell, Independence Hall in Philadelphia, and the opening lines from America.This magnificent boxed set is strictly limited to only 2,015 sets worldwide.