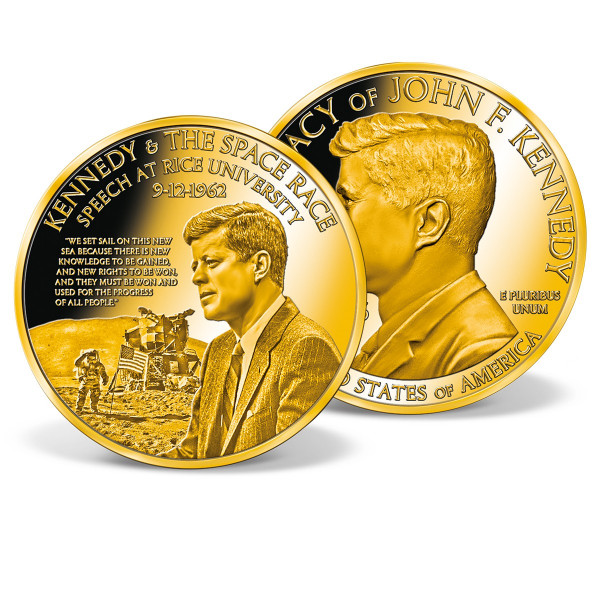 Includes a free preview of future issues in the collection The Legacy of John F. Kennedy. For more information, please refer to the Satisfaction Guarantee tab below. If you do not wish to preview future issues in the collection, you may purchase the single item using the 'Individual Item Only' tab at right.
Price $129.95 * $19.95
Total: $19.95
You save $110.00
Total: $129.95
Tweet
Share
Description Satisfaction Guarantee
Description
"We choose to go to the moon ... not because it is easy, but because it is hard."... more
Close menu
Kennedy and the Space Race Colossal Commemorative Coin

With these historic words - delivered at Rice University on September 12, 1962 - President John F. Kennedy set in motion the mission that would result in mankind's greatest achievement: Sending a man to the moon and returning him safely to earth within the decade. This set off the space race against Russia, which was won by America on July 20, 1969, when Neil Armstong became the first human to step foot on the moon's surface.

Available exclusively from American Mint, this magnificent coin was specially designed and minted to mark the 50th Anniversary of the Apollo 11 moon landing. A breathtaking 2.75" in diameter, the Kennedy and the Space Race colossal commemorative coin is minted to the highest quality "Proof " standard and layered entirely in 24k gold. The obverse features dual images of American astronauts on the moon and President Kennedy along with a quote from his famous "We choose to go to the moon" speech.